In today’s episode of Chembarathi, Stella warns Kalyani of Ganga’s move to trap her during the ceremony. 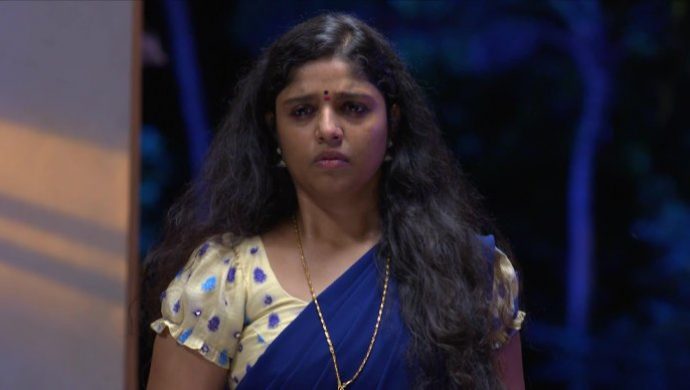 Previously on Chembarathi, Anand’s reply to Ganga’s parents confuses everyone gathered as he states that Kalyani’s marriage will happen before Ganga’s. Akhila assumes that he is talking about the marriages undertaken by the family to help underprivileged girls as per Guruji’s requests.

Later at night, Anand tells Kalyani that he has made a plan to make her win the challenge posed by Ganga. While returning back to his room, Ganga stops Anand and tells him how she will be the one to marry him. He replies saying that it won’t be considered winning because Kalyani won’t be present in Thrichambarath because of Akhilandeshwari banishing her from the house.

Anand tells her that she won’t be winning the challenge because Kalyani is not even present in Thrichambarath to see her win him over. Ganga thinks of a way to get Kalyani back in Thrichambarath and seeks Akhila’s permission to invite the latter to the ceremony the next day.

In today’s episode of Chembarathi, Vilasini tells Ganga that inviting Kalyani to the house for the function is a wrong move as Anand wants that to happen. Vilasini is shocked when Ganga tells her about her plan to give Kalyani a sedative in the function the next day and shows her a chemical powder.

Ganga calls Stella and makes her drink the juice mixed with the powder to show Vilasini the effect of the powder. Stella gets intoxicated by the powder and tells Vilasini and Ganga about her being in love with Subramanian. When she sees Subramanian walking into the room, she goes to embraces him. Subramanian gets scared when Stella falls unconscious and sprays water on her face to wake her up.

Listen To These #5 Hit Malayalam Tracks To Cure Your Self Isolation Blues!