In today’s preview of Chembarathi, Kalyani is shocked when Stella tells her about Ganga’s real intentions. 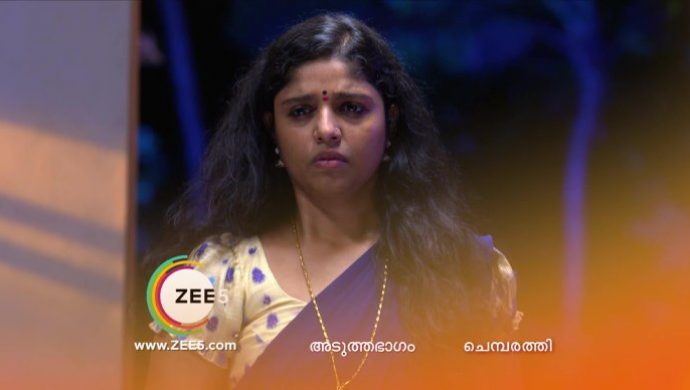 Previously on Chembarathi, Vilasini tells Ganga’s parents that Anand is in love with Kalyani. Anand’s reply confuses everyone gathered when he states that Kalyani’s marriage will happen before Ganga’s. Akhila assumes that he is talking about the marriages undertaken by the family to help underprivileged girls as per Guruji’s requests.

Ganga meets Vilasini to tell her about her worries for Anand as he is capable of ruining their plans. Vilasini asks her to be careful and informs Priyanka about the same as Anand’s moves can be unpredictable. Later at night, Anand meets Kalyani to tell her that she will be the one wearing the ancestral jewellery instead of Ganga.

While returning back to his room, Ganga stops Anand and tells him that she will be the one winning the challenge. He replies saying that it won’t be considered winning because Kalyani won’t be present in Thrichambarath because of Akhilandeshwari banishing her from the house. Ganga thinks of a way to get Kalyani back in Thrichambarath and seeks Akhila’s permission to invite the latter to the ceremony the next day.

In today’s preview of Chembarathi, Kalyani gets excited when Stella comes to her house to invite her to Thrichambarath for the dance event before the ceremony. Kalyani is also shocked when the latter warns her that Ganga is waiting for her with a trap and tells her not to come for the event. What will be Kalyani’s resolution? Stay tuned to find out!