In today’s episode of Chembarathi, Akhila slaps Nandana for her rude comments on Krishnan. 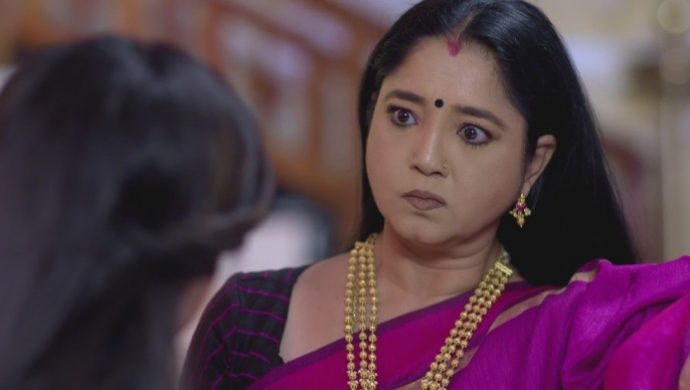 Previously on Chembarathi, Anand and Kalyani continue their conversation about Nandana’s sudden transformation. Back in Thrichambarath, Aravind is relieved when Akhila asks him to hand over the Managing director’s post to Anand. Nandana gets angry at the contents of the letter and throws it on Akhila’s face for favouring Anand.

When Krishnan asks Aravind to console Nandana, he tries to make her apologise to his parents. Aravind loses his temper when Nandana calls him the family’s puppet and he asks her to leave Thrichambarath. Before leaving, Nandana tells the family gathered about how Aravind denied her physical obligations after their marriage because his brother Anand was not married yet.

In today’s episode of Chembarathi, Aravind tells Nandana how both of them had agreed on not having children after they got married. Krishnan tries to stop Nandana from leaving and tells her how differences are common among couples after marriage.

Nandana yells at Krishnan and tells him that she doesn’t value his opinion because he only listens to his wife. Akhila slaps Nandana as she is angered by her rude comments on Krishnan and asks her to leave. Disheartened by his wife leaving, Aravind returns to his room. Vilasini, Ganga and Jayanthi are elated by the sudden turn of events.

Back at Thrichambarath, Krishnan is seen disturbed over Nandana leaving the house. Akhila tries to console him and apologises for Nandana’s rude comments. She stops him from calling Nandana’s parents to bring her back and tells him how it will go against her decisions as his wife.

Meanwhile, during their journey to the dance school, Anand asks Kalyani to sleep for a while and drives back to Thrichambarath. Confused about Anand’s plan, Kalyani asks him why they are back in Thrichambarath. He persuades her to come to his room and makes her cover her head in her saree.

Unfortunately for the couple, Jayanthi watches them preparing to enter the house. She is quick to wake up Vilasini and tells her about the same. They both rush out to catch Anand red-handed and waits for Kalyani to enter the house. Anand figures out that Vilasini is awake and hides Kalyani. When he enters the house, Vilasini starts questioning him about Kalyani’s whereabouts. When Anand tells her that she is at the dance school, Jayanthi tells him that he is lying as she saw the both outside. How will Anand trick Vilasini? Stay tuned to find out!

Bring Twice The Fun To Your Week With The Funniest Characters From ZEE5 Malayalam Shows!