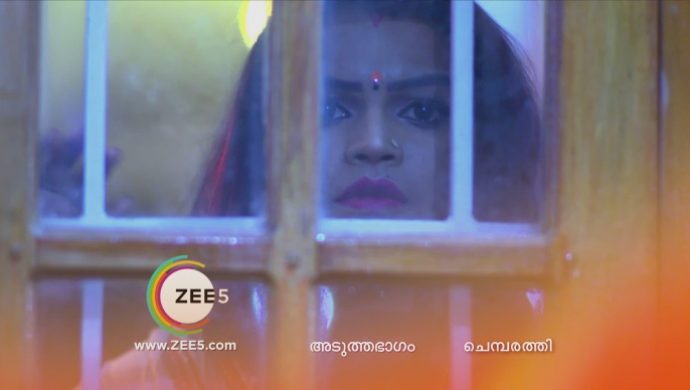 Previously on Chembarathi, Anand and Kalyani continue their conversation about Vilasini brainwashing Nandana. Kalyani tells Anand that she fears Nandana of corrupting Aravind also. Back in Thrichambarath, Aravind is relieved when Akhila asks him to hand over the Managing Director’s post to Anand.

The contents of the letter Aravind was asked to sign infuriated Nandana and she starts yelling at Akhila for always favouring Anand. Akhila tells Nandana how Aravind has made too many mistakes and is inexperienced compared to Anand.

Aravind tries to console her but Nandana throws the letter on Akhila’s face and leaves the room. He goes to his room and tries to make Nandana apologise to his parents. Aravind loses his temper when Nandana calls him the family’s puppet and he ask her to leave Thrichambarath.

As Nandana is about to leave the house, Akhila and Krishnan try to stop her. She tells them how Aravind is a man with no quality and calls him a puppet of the family. Nandana tells the family gathered about how Aravind denied her physical obligations after their marriage because his brother Anand was not married yet.

In today’s preview of Chembarathi, Anand brings Kalyani back to Thrichambarath. He asks her to cover her head and makes her wear sunglasses so that he can sneak her into the house. Unfortunately for the couple, Jayanthi watches Anand preparing Kalyani to enter the house. What will be Jayanthi’s plan to tackle Anand? Stay tuned to find out!