Chembarathi 20 March 2020 Preview: Vilasini Plans To Use Priyanka Against Anand

In today’s preview of Chembarathi, Anand assures Kalyani that she will be the one to wear the ancestral jewellery. 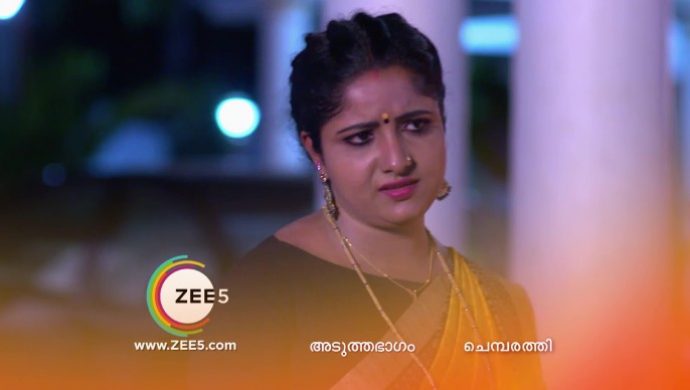 Previously on Chembarathi, Anand asks Subramanian to distract Guruji during the ceremony and place Kalyani’s horoscope in Ganga’s place. Vilasini thinks of informing Akhila about Subramanian interchanging the horoscopes but gets stopped by Aravind.

After the ceremony, Ganga tells Kalyani that she will be the next Akhilandeshwari after marrying Anand. She challenges the latter and tells her that Akhila is going to give her the ancestral jewellery. Anand gets disheartened when he overhears the conversation between the two.

Subramanian and Aravind ask Anand to wait for the right time as he insists on telling Akhilandeshwari about Kalyani. When he goes outside to do the same, Krishnan stops him. The latter tells him about how Akhila will kill herself if she gets to know about his feelings for Kalyani.

Meanwhile, Akhila slaps Ganga when she tells her that Anand and Kalyani are in a relationship. Krishnan stops Akhila from further hurting Ganga and asks Anand to come down for a solution. Akhila tells Ganga’s parents that Anand will tell them about how he is not in love with Kalyani.

In today’s preview of Chembarathi, Anand tells Kalyani that Ganga is going to lose the challenge and the latter will be the one to wear the ancestral jewellery. Meanwhile, Vilasini tells Ganga that they should be careful of Anand’s moves and plans on playing a game using Priyanka. What will be Vilasini’s plan? Stay tuned to find out!