In today's episode of Chembarathi, Aravind loses his temper and asks Nandana to leave Thrichambarath. 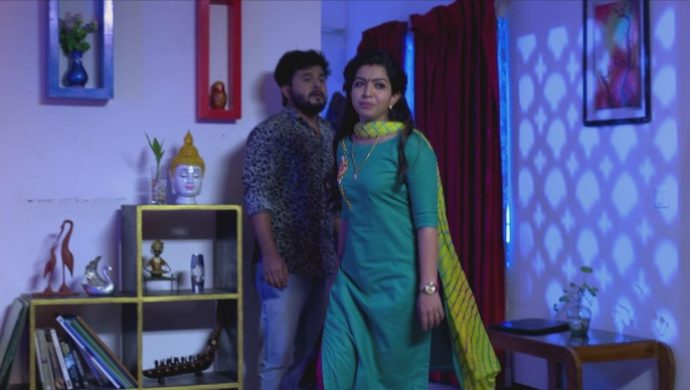 Previously on Chembarathi, Kalyani and Anand visit a temple on the way to the dance school.  While the couple pray for each other, Kalyani notices a tree where devotees are seen hanging requests as written notes. Anand and Kalyani write on a piece of paper and hang on the tree as requests to the temple deity. She is overjoyed as Anand’s note is a request to marry her soon.

Back in Thrichambarath, Ganga starts worrying about losing her ring and decides to hide it with Jayanthi. As they continue their journey to the dance school, Kalyani expresses her wish to tell Anand about things she hasn’t told him about. The latter is shocked when Kalyani tells him about how she suspects Vilasini to have brainwashed Nandana.

In today’s episode of Chembarathi, Kalyani and Anand continue their conversation about their suspicions regarding Vilasini brainwashing Nandana. Kalyani tells him about how Nandana started planning against her after the facial mix incident. She also tells him how Aravind might also get brainwashed by Nandana and their relationship will get ruined because of the same. Anand assures her that Aravind is good at heart and asks her to stay optimistic.

Back at Thrichambarath, Akhila and Krishnan ask Aravind to sign a letter that will make him hand over the Managing Director post of his company to Anand. Aravind is relieved when Akhila asks him to assist Anand for a while. Nandana gets infuriated by the letter and yells at Akhila for always favouring Anand. The latter tells her how Aravind has done too many mistakes and has less experience compared to Anand.

Aravind tries to console her but Nandana throws the letter on Akhila’s face and goes to her room. Krishnan is quick to ask Aravind to console her before signing the letter. Aravind tries to tell her to stay positive but Nandana calls him a petty puppet of Thrichambarath. He continues to reason with Nandana and asks her to apologise to his parents but she continues to yell at him. Aravind loses his temper and asks her to leave Thrichambarath.

Nandana takes her packed bag out and tells him that she was already prepared for it several days before. As she is about to leave, Akhila and Krishnan try to stop her from leaving. She tells them how Aravind is a man with no quality and calls him a puppet of the family. Akhila is angered by her comment on her son and tells her how Aravind is an affectionate individual whose qualities do not have to be explained.

Nandana retorts by telling the family gathered about how Aravind denied her physical obligations after their marriage because his brother Anand was not married yet. She continues to tell Akhila about how people ridiculed her for not having children and calls Aravind cruel for denying her wishes as his wife. What will Akhila’s reply to Nandana be? Stay tuned to find out!

Kabani Special: Who Is Radhika And Why Is She Hiding From Menaka?