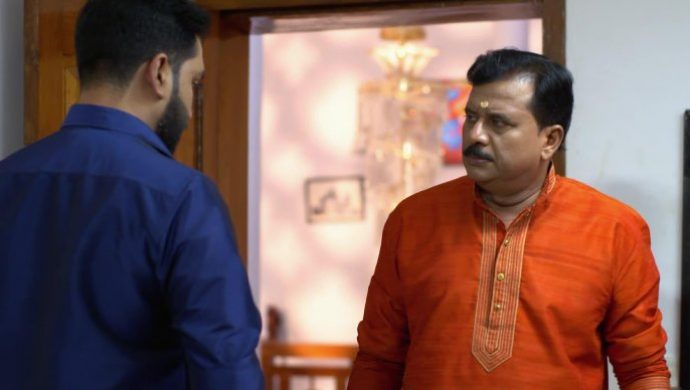 Previously on Chembarathi, Guruji stops the families from leaving to the temple and asks Akhila to conduct the ceremonies in Thrichambarath itself. Das is disturbed by Guruji’s intervention and goes to the temple to pray for Kalyani.

Ganga tells Kalyani that she had overheard Anand telling the latter about his plans. Kalyani gets angry and challenges her to try and get engaged with Anand.  As the ceremony begins Guruji asks the parents to give him the horoscopes. Akhilandeshwari and Krishnan get disturbed when Kalyani’s horoscope falls from Das’s hands.

Meanwhile, Ganga goes outside to talk to Priyanka and is surprised when she learns that the man posing as her father is the latter’s henchman. As the families continue with the ceremony, Akhila steps aside to answer a phone call from her office.

In today’s episode of Chembarathi, Anand asks Subramanian to distract Guruji and place Kalyani’s horoscope in Ganga’s place. Vilasini notices Subramanian engaging Guruji in a phone conversation as he follows Anand’s instructions. As Akhila enters, Vilasini starts to tell her about Anand’s plan but gets stopped by Aravind who threatens to tell everyone about Ganga’s forged horoscope.

Akhilandeshwari gets suspicious of Ganga’s father broadcasting the ceremony and asks him to video call the person he was talking to. Ganga lies that he was broadcasting it to her friend and saves her fake father. Kalyani and Anand are elated when the families exchange the horoscope during the ceremony.

After the ceremony, Ganga confronts Kalyani and claims that she will be the next Akhilandeshwari. Kalyani tells her that she will stop her before she corrupts the family, but is disheartened when Ganga informs her that Akhila is going to give her the ancestral jewellery. Anand gets disturbed as he overhears the conversation between the two.

Anand meets Subramanian and Aravind to tell them that he is going to inform Akhilandeshwari about his love for Kalyani. They both ask him to wait for some time but Anand gets frustrated and walks outside the room. Krishnan stops Anand from telling the truth to Akhila and tells him that she will kill herself if he reveals his feelings.

Meanwhile, Akhila slaps Ganga when she tells her about Anand and Kalyani being in love with each other. Krishnan stops Akhila from slapping her again and calls Anand downstairs for a solution. Akhila tells Ganga’s parents that Anand himself will tell them about how he is not in love with Kalyani. What will be Anand’s reply? Stay tuned to find out!