In today’s preview of Chembarathi, Krishnan stops Anand when he leaves his room to talk to Akhila. 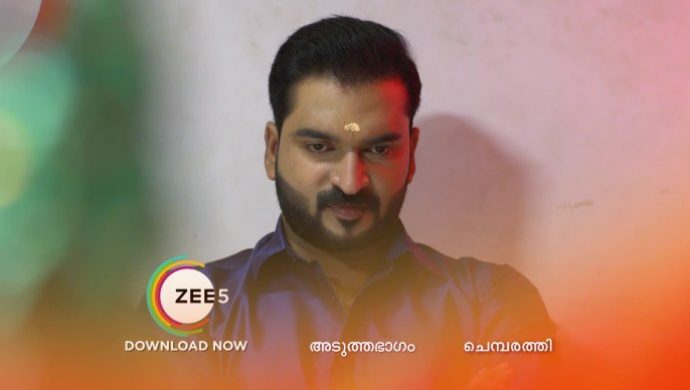 Previously on Chembarathi, Akhila introduces Kalyani’s fiancée and his parents to Ganga’s family. The family members are stopped by Guruji as they head to the temple. Guruji tells Akhila that it will be a bad omen if the engagement ceremonies were to happen outside of Thrichambarath. Das is disturbed by Guruji’s revelation and goes to the temple to pray for Kalyani.

As the preparation for the engagement ceremony proceeds, Ganga tells Kalyani that she had overheard Anand telling the latter about his plans. Kalyani gets angry and challenges her to try and get engaged with Anand. As the ceremony begins, Guruji asks the parents to give him the horoscopes.

Akhilandeshwari and Krishnan get disturbed when Kalyani’s horoscope falls from Das’s hands as he gives it to Guruji. Vilasini is quick to tell Ganga’s parents that Thrichambarath family is also conducting Kalyani’s engagement to Neeraj and demeans her by calling her a servant.

Meanwhile, Ganga goes outside the house to call Priyanka and is surprised to hear that the man posing as her father is the latter’s henchman. As the family continues the ceremony, an urgent call from the office disturbs Akhila.

In today’s preview of Chembarathi, Anand tells Aravind and Subramanian that he is worried as he might lose Kalyani. He tells them that he is going to reveal everything to his mother. He is stopped on the way by Krishnan as he runs out of the room. Does Krishnan know about Anand and Kalyani? Stay tuned to find out!