In today’s episode of Chembarathi, Kalyani’s horoscope falls from Das’s hands while handing it over to Guruji. Read the full update here. 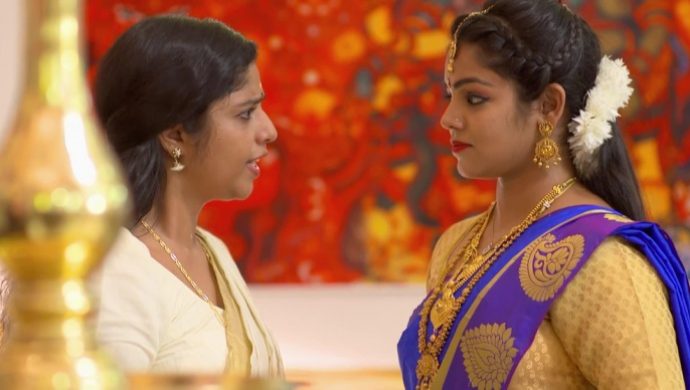 Previously on Chembarathi, Ganga spots Anand and Kalyani together outside Thrichambarath. Vilasini asks Ganga to be careful as her engagement is due the next day. Anand consoles Kalyani by reassuring her that he will be the one getting engaged to her.

Aniyankuttan tells Kalyani that his plan to check Ganga’s phone failed as he couldn’t unlock it. As they both try to find another way, Das comes home and tells Kalyani that the families have decided on exchanging horoscopes instead of rings during the engagement.

The next day, Ganga’s parents come to Thrichambarath as the family prepares to leave for the engagement ceremony. Subramanian and Aravind are shocked to learn from Anand that Ganga has forged her horoscope. Anand continues planning his next move with Aravind and Subramanian as they discuss a way to tackle Ganga during the engagement.

In today’s episode of Chembarathi, Anand tells Subramanian and Aravind that he will go down only when Kalyani and Das come inside the house. Akhila introduces Neeraj and his parents to Ganga’s family. As the family members head towards the temple, Akhila is surprised to see Guruji coming to Thrichambarath.

As the preparation for the engagement ceremony proceeds, Ganga tells Kalyani that she had overheard Anand telling the latter about his plans. Kalyani gets angry and challenges her to try and get engaged to Anand. Meanwhile, Das goes to the temple to do a separate offering for his daughter’s engagement.

Guruji starts the ceremony and asks the parents to hand over the horoscopes. The families are disturbed when Kalyani’s horoscope falls from Das’s hands while he gives it to Guruji. Vilasini is quick to tell Ganga’s parents that Thrichambarath family is also conducting Kalyani’s engagement to Neeraj and demeans her by calling her a servant.

Meanwhile, Ganga goes outside the house as she gets a call from Priyanka. She is surprised to hear from the latter that the man who is posing as her father for the engagement is live broadcasting the ceremony to Priyanka. As the family continues the ceremony, an urgent call from the office disturbs Akhila. What will be Anand’s plan to sabotage the ceremony? Stay tuned to find out!