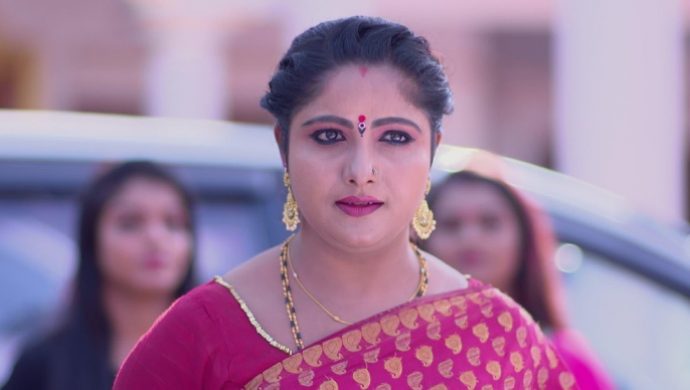 Previously on Chembarathi, Vilasini interrupts Ganga’s discussion with Priyanka and tells her about how she has burnt Kalyani’s feet to make it easier for her to win the dance competition. The latter gets happy on hearing this and tells Vilasini that she wishes to see Kalyani in pain. They are disappointed when they see Kalyani and Anand practising together even with the injuries.

When Ganga comes back to Thrichamabarth, Akhila stops her and asks her about her worried face. She motivates her by gifting her a gold ring and asks her to stay confident. When Anand comes back into the house, Ganga tells him about Akhila motivating her to win the competition. The latter retorts by challenging and says that she will lose the gold ring in a day’s time. Anand meets Subramanian and tells him about Kalyani’s injuries.

In today’s episode of Chembarathi, Ganga is seen worried as she thinks about Anand’s challenge to make her lose the ring in a day’s time. Vilasini and Jayanthi join her to discuss Anand’s motives and asks her to remain confident. The trio decide to go for shopping as Ganga needs clothes and accessories for the competition and asks for Akhila’s permission.

As Anand comes down from his room, Vilasini asks him to join them to help Ganga with her shopping to which Akhila and Krishnan also agrees. Anand tells them that he has to take Kalyani to a dance academy and tries to leave. Vilasini stops him as she asks him why he is taking care of the servant when his fiancee is in need of help. Anand replies to her by saying that his company’s brand ambassador winning the competition is a professional matter for him and he will prioritise the same over Ganga.

Akhila asks Ganga to go for shopping with Vilasini as she is shocked to hear Anand’s reply. Meanwhile, Anand goes to Kalyani’s house and asks for Das’s permission to take her to a dance academy. As they are about to leave, Kalyani prays to her mother to bless her to win the competition. As they drive ahead, Kalyani asks Anand if it is necessary to join an academy for the competition. He tells her how she needs to be a part of a disciplined dance course to win the competition.

Meanwhile, Vilasini and Ganga discuss why Anand took Kalyani to a dance academy before the competition. They suspect Anand to be planning on giving Kalyani treatment and practice dance at the academy. Vilasini asks Ganga to call Priyanka to further plan their move to defeat Kalyani. What will be Priyanka’s plan to tackle Anand? Stay tuned to find out!