In today’s episode of Chembarathi, Aravind and Subramanian are shocked to learn that Ganga forged her horoscope. Read the full update here. 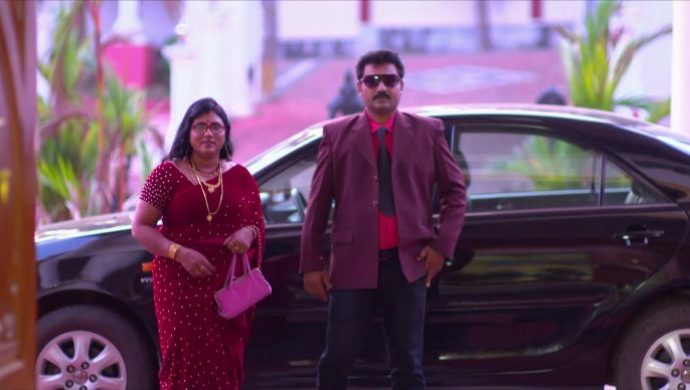 Previously on Chembarathi, Aniyankuttan tells Kalyani that he will sneak into Ganga’s room to search her phone when the latter tells him about her worries. The next day, Akhila calls Guruji to perform a pooja to figure out the hindrances to Anand’s marriage. Guruji informs her that if the lamps go out during the pooja, it will symbolise a bad omen.

Akhila is shocked when the lamps go out during the pooja and asks Guruji for a solution. She is relieved when he tells them to help with the marriage of nine underprivileged girls and conduct Anand’s wedding in two weeks. Later on, Aniyankuttan’s plan fails when Ganga finds him in her room. Anand suspects that Ganga is hiding something in her phone when she tells the family about the thief going through her phone. Vilasini starts worrying when Anand starts checking Ganga’s phone.

In today’s episode of Chembarathi, Ganga’s phone gets switched off while Anand searches her call history. Vilasini tries to figure about the thief and suspects that it was a planned move against Ganga. Anand goes out to meet a worried Kalyani and consoles her by reassuring her that he will marry her. Meanwhile, Ganga spots the couple together and informs Vilasini about the same.

The next day, Akhilandeshwari hires a secretary for herself named Stella, who Vilasini instantly dislikes. On the day of the engagement, Vilasini discusses Stella’s arrival at Thrichambarath with Ganga. Meanwhile, Subramanian and Aravind are shocked to learn from Anand that Ganga has forged her horoscope. He tells them about how Ganga’s horoscope looks like Kalyani’s with minor changes to it.

Ganga’s parents come to Thrichambarath as the family prepares to leave for the engagement ceremony. Anand continues planning his next move with Aravind and Subramanian as they discuss a way to tackle Ganga. Anand refuses to go down to meet Ganga’s parents when Sujatha comes looking for him. What will be Anand’s next plan? Stay tuned to find out!