In today’s preview of Chembarathi, Ganga sees Anand and Kalyani talking together. 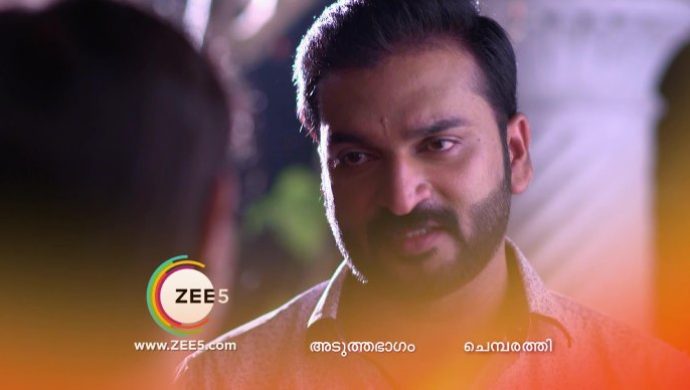 Previously on Chembarathi, Kalyani eavesdrops on Ganga’s phone conversation with Priyanka. Kalyani’s efforts to figure out Ganga’s real identity fails when the latter ends the conversation abruptly and goes inside Thrichambarath. She goes back to her house and tells Aniyankuttan about her worries.

Guruji tells them that they will have to help with the marriage of nine underprivileged girls as a solution to their problem and asks them to conduct Anand’s marriage in two weeks. Aniyankuttan’s attempt to check Ganga’s phone fails as she starts screaming when she finds him in her room. Anand suspects that she is hiding something in her phone when Ganga tells the family about the thief going through her phone.

In today’s preview of Chembarathi, Anand assures Kalyani that he will be the one to marry her in the end. Meanwhile, Ganga sees Anand and Kalyani talking to each other outside Thrichambarath. She calls Vilasini and shows her the couple talking to each other. What will be Vilasini’s next move? Stay tuned to find out!