In today’s preview of Chembarathi, Vilasini and Ganga get agitated as they watch Anand helping Kalyani with the dance practice. 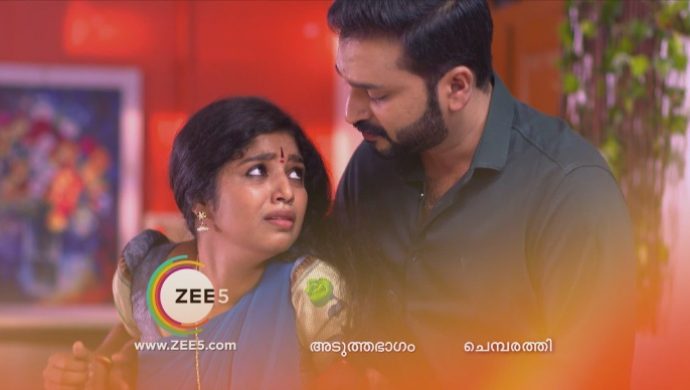 Previously on Chembarathi, Vilasini makes Anand wait in front of Kalyani’s house as she figures out his intentions. She further starts a conversation with Das, making it difficult for Kalyani to come out of her house. Anand calls Aravind to tackle Vilasini’s move and makes him engage her while he meets Kalyani.

Vilasini confronts Kalyani the next day as she is boiling water for tea. She questions the latter about her missing phone and asks her why she entered Thrichambarath without Akhila’s permission. Vilasini tells her that she is going to stop her from winning the competition and pours boiling water on her feet before she leaves.

Aniyankuttan suspects something unfortunate happened to his sister as he sees Vilasini walking out of his house. Kalyani tries to hide the truth from him but shows him the burn marks when he insists. Aniyankuttan is relieved when Anand shows up to check on Kalyani. He asks her to continue practising for the competition but is shocked to find the burn marks on her feet. Kalyani lies to him when he asks her about the injuries.

In today’s preview of Chembarathi, Anand and Kalyani continue practising for the brand ambassador competition. Kalyani is seen struggling during the practice as she is hurting from the burns on her feet. Ganga and Vilasini are seen agitated as they watch them practise. How will Kalyani win the competition now with her injuries? Stay tuned to find out!