In today’s preview, Akhilandeshwari catches Kalyani and Anand talking over the phone! 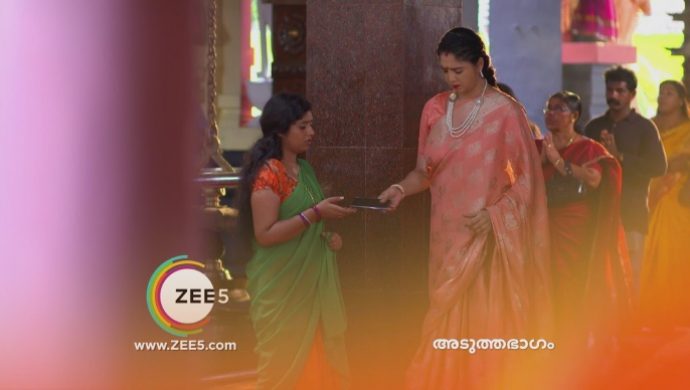 In the last episode of Chembarathi, Kalyani is disturbed as Akhilandeshwari scolds her for forgetting her place in the family as a servant. She decides not to call Anand ever again as she gets hurt from Akhila’s words. As she switches off her phone and sleeps, Anand gets frustrated and decides to not eat until she calls him.

Aravind learns about his brother and lies to Das, so that he can talk to Kalyani. Kalyani stays adamant in her decision and is confused when she gets to know of Anand starving himself. Kalyani starts talking to her favourite flowers about her decision and as she talks about her love for Anand, Akhila approaches her. Akhila starts consoling her as she tells her about her liking for her and how she gets hurt while other members of the family criticize her. Kalyani decides to call Anand as she starts worrying about him, but Akhila decides to take her to the temple.

In the preview for today’s episode, we see Akhilandeshwari praying in the temple, while Kalyani is on a call with Anand. She finds Kalyani’s sudden disappearance suspicious and asks her for her phone. Kalyani gets startled by Akhila as she demands her phone and stands still. Akhila is seen talking on the phone with Anand, asking him reasons for calling Kalyani. What will be Anand’s answer to Akhila’s questions? How will he tackle the situation?

If you are new to the show, here’s what you need to know. Kalyani is a village girl, who works as a household cook for the wealthy Thrichambarath family. Eventually, she falls in love with Anand who’s the eldest son of Akhilandeshwari. The matriarch of the family, Akhilandeshwari’s notions of wealth and pride keep Kalyani and Anand, from disclosing their relationship to the family. The story evolves as Kalyani becomes a part of the evil game played by Akhila’s relatives to destroy the family.

Sreejith Vijay From Swathi Nakshathram Chothi Is The Style Inspiration You Need!

Sathya From Sathya Enna Penkutty Is The Motivation You Need To Enjoy Life To The Fullest.