In today’s episode of Chembarathi, Aniyankuttan runs out of Thrichambarath when Ganga finds him in her room. Read the full update here. 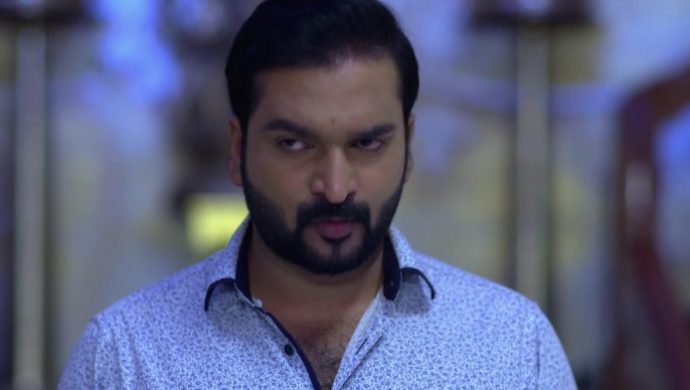 Previously on Chembarathi, Neeraj is confused when Anand tells him that Kalyani is lucky to fulfil her dreams and gives her the Chembarathi flower. He also tells her that she will marry the person she likes. Later on, Akhila tells the family members to prepare for Anand’s engagement and asks Nandana to be in charge of those preparations.

Vilasini meets Priyanka to tell her that she will ruin her plans for Anand’s wedding if she is not gaining anything out of the same. Priyanka gets angry and points a gun at Vilasini and threatens to kill her if betrays her. Vilasini is relieved when Ganga tells her about her plan to kill Akhila after Anand’s marriage.

In today’s episode of Chembarathi, Kalyani eavesdrops when Ganga talks to Priyanka over the phone. Ganga informs Priyanka that Kalyani has figured out her real identity and asks her for a solution. Kalyani’s efforts to figure out who Ganga is talking to fails when she ends the conversation abruptly and goes back to Thrichambarath.

Kalyani goes back to her house and tells Aniyankuttan about her worries. The latter tells her that he will sneak into Ganga’s room and search for her call history. The next day Akhila calls Guruji to perform a pooja to figure out if there are hindrances to Anand’s marriage.

As the pooja proceeds, Guruji tells Akhila and Krishnan that if the lamps he has lit were to go out, it will symbolise a bad omen related to Anand’s marriage. Akhila is shocked when the lamps go out during the pooja and ask Guruji for a solution. She is relieved when he asks them to help with the marriage of nine underprivileged girls.

While Krishnan and Akhila inform the rest of the family about Guruji’s solution, he tells them that they will have to conduct Anand’s marriage in two weeks. Anand is seen disturbed when Akhila asks the family to start preparing for his engagement.

Later at night, Aniyankuttan sneaks into Ganga’s room while she goes to the washroom. He finds her phone and covers himself in a blanket as he tries to unlock her phone. Aniyankuttan runs out of Thrichambarath because Ganga screams out loud when she finds someone in her room. Anand suspects that she is hiding something in her phone when Ganga tells the family about the thief going through her phone. Anand is shocked when he searches Ganga’s call history. Will Anand find Ganga’s secrets in her phone? Stay tuned to find out!