In today’s preview of Chembarathi, Ganga is startled to find someone hiding in her room. 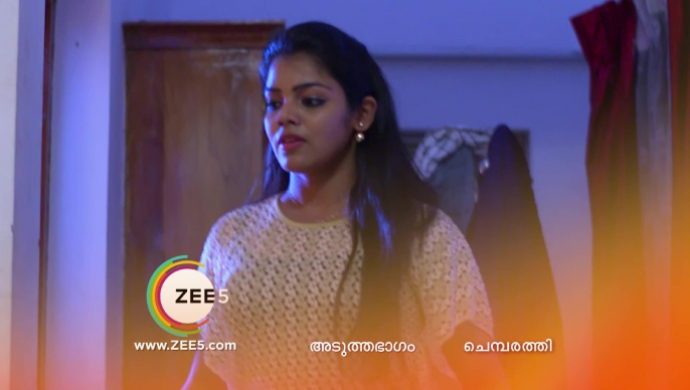 Previously on Chembarathi, Neeraj tells Kalyani about his likings as Akhila asks him to talk to her outside the house. He is confused when the latter tells him about how she likes Anand and the family members of Thrichambarath. Anand watches both talking outside and approaches them with a Chembarathi flower.

Anand tells Neeraj that Kalyani is lucky enough to fulfil her dreams and gives her the Chembarathi flower while telling her that she will marry the person she likes. Akhila tells the family members to prepare for Anand’s engagement and asks Nandana to be in charge of the preparations for the same.

Vilasini meets Priyanka to tell her that she will sabotage Anand’s wedding if she is not gaining anything out of the same. Priyanka gets angry listening to Vilasini’s threat. She points a gun at her and threatens to kill Vilasini if she were to betray her.

A scared Vilasini is relieved when Priyanka tells her about her plan to kill Akhilandeshwari after Anand’s marriage to Ganga. Later at night, Kalyani decides to find out who Ganga was talking to the day when she tried to kill Krishnan.

In today’s preview of Chembarathi, Akhilandeshwari and Krishnan are seen praying during a pooja with Guruji. Aniyankuttan is seen in Thrichambarath sneaking into Ganga’s room and hiding using a blanket. The latter is startled to see someone hiding under a blanket in her room. How will Aniyankuttan tackle Ganga’s next move? Stay tuned to find out!