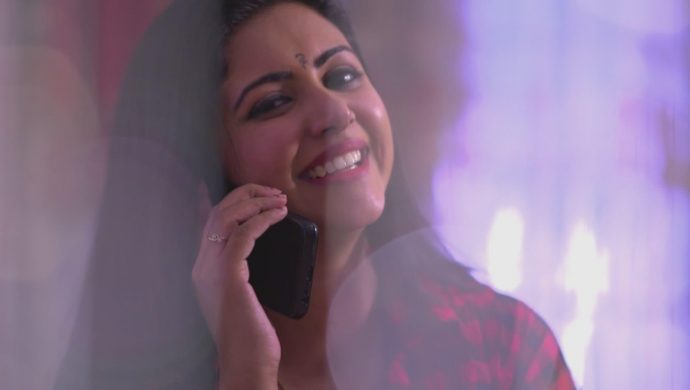 Previously on Chembarathi, Vilasini is infuriated when her plan fails and Jayanthi dozes off after having the sweets. She gets jealous of Kalyani when Akhila appreciates her effort in front of the guests gathered.  Vilasini is further infuriated when Akhila kisses Kalyani on her forehead for singing the devotional song during the pooja.

In today’s episode of Chembarathi, Vilasini confronts Kalyani in the kitchen and starts to intimidate her with her questions about the devotional song she sang during the pooja. She keeps criticising her for being distracted and accuses her of thinking about Anand while singing the song. She is enraged when Kalyani tries to explain herself and starts to choke her. Anand walks in hearing the commotion and saves Kalyani from Vilasini. He vouches for Kalyani and asks Vilasini to stop demeaning her.

Embarrassed about the incident earlier, Vilasini tries to think of a way to get back at Akhila and Kalyani. Nandana walks in while Vilasini keeps thinking about revenge and asks her why she is so stressed out. Vilasini explains to her about her failed plans and both women hatch a plan to take the ancestral necklace back from Kalyani the next day after the pooja.

Soon after Nandana leaves the room, Vilasini calls Priyanka and informs her of the events that happened. Priyanka tells her about her plans to stop Akhila from gifting the employees with the bonus she had promised, thus embarrassing her in front of everyone. Vilasini is elated to learn about her plans and awaits Priyanka’s return from Mumbai to Thrichambarath.

Later, as Kalyani is leaving, Anand waylays her and warns her of Vilasini’s plans. He asks her to take care of the ancestral necklace and reminds her of the day she challenged Vilasini. Kalyani explains to him about her love for him and tells him how she yearns to be his shadow. Anand is delighted to tell her of his plan to reveal their relationship to Akhila the next day.

Kalyani starts crying as she starts feeling anxious about Anand’s sudden decision to seek permission from Akhila to marry her. She starts crying in front of her mother’s picture but Aniyankuttan comes to console her. He asks her to stay optimistic about the future and cheers her up. The next day as she walks into Thrichambarath, Anand is seen waiting for her. He cheerfully reminds her of his decision again but is shocked to see Kalyani disturbed as she is reminded of Akhila’s promise to keep Anand safe. What will Akhila’s reaction be when Anand tells her about his decision to marry Kalyani? Stay tuned to find out!