In today’s preview, Akhilandeshwari catches Kalyani talking about her love for Anand! 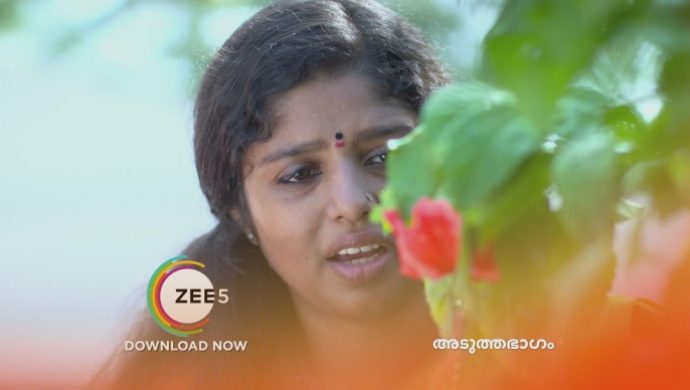 In the previous episode of Chembarathi, Aniyankuttan finds his sister Kalyani singing and decides to call Anand. Irritated by his mischief, Kalyani scolds him and he runs away, laughing, to school. Meanwhile, at Thrichambarath, Vilasini and Nandana decide to tell Akhila about how irresponsible and arrogant Kalyani has become after she’s got the necklace.

Missed out on the latest episode of ‘Chembarathi’? Watch it here:

After talking to Nandana about the facial mix incident that happened, Akhila scolds Kalyani for being irresponsible. She also adds how the necklace doesn’t give her any right to be rude towards the Thrichambarath family and that they all should be respected equally. Kalyani contemplates the events back at her house and blames herself for disrespecting Akhila and her notions. She gets scared when she starts thinking about disclosing her relationship with Anand.

In the preview for today’s episode, we see Kalyani talking to her favourite Chembarathi flowers outside her home. She talks about how she’s not privileged to lead a love life with Anand and repeats to herself that she is betraying Akhila every time she talks to him. Kalyani decides not to call him ever again.  As She is talking to the flowers, Akhilandeshwari approaches her from behind and places her hand over Kalyani’s shoulder. How will Kalyani tackle the situation?