In today's episode of Chembarathi, Kalyani lies to Anand about the burn marks on her feet. 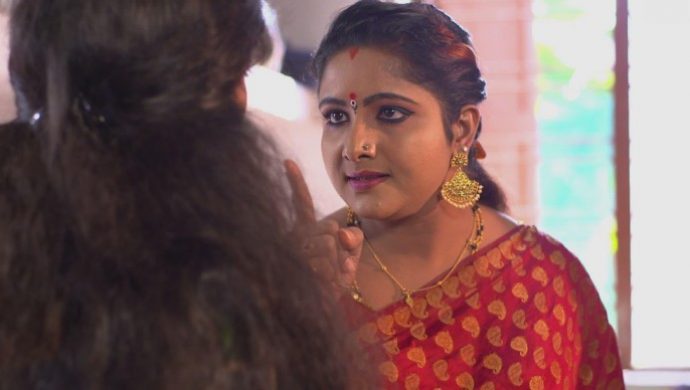 Previously on Chembarathi, Akhila gets angry when Vilasini proposes Ganga’s engagement to Anand. She yells at them for not being confident of winning the competition. Akhila tells them that she can’t ruin the company’s reputation and goodwill because they are unable to win against Kalyani. She reminds Ganga that she agreed to the competition only because she insisted.

Meanwhile, Anand ponders over Akhila’s upcoming plans and he calls Kalyani to discuss the same. However, Kalyani’s phone has been left behind in the kitchen at Thrichambarath. Vilasini discovers the phone ringing. She switches off the phone and waits outside Kalyani’s house to catch her and Anand together.

In today’s episode of Chembarathi, Vilasini makes Anand wait in front of Kalyani’s house as she figures out that he is there to meet her. Unfortunately for Anand, Das comes back from work and engages in a long conversation with Vilasini making it difficult for Kalyani to come out of her house. Anand calls Aravind to tackle Vilasini’s move and makes him engage her while he and Kalyani meet.

The next day, Vilasini confronts Kalyani in her house while she boils water to prepare tea. She asks the latter about her missing phone and why she entered Thrichambarath defying Akhila’s orders. Kalyani is intimidated by Vilasini’s questions and when she tries to reply, the latter slaps her. Vilasini further tells Kalyani that she is going to stop her from winning the dance competition and throws the boiling water on her feet before she leaves.

The burns hurt Kalyani but she wipes her tears off when Aniyankuttan comes back. He suspects something unfortunate has occurred as he sees Vilasini walking out of the house and asks Kalyani about the same. She lies to him initially but shows him the burn marks when he insists. Aniyankuttan is shocked to find the burn marks and rushes to call Anand. As Kalyani asks Aniyankuttan to stop, Anand shows up at her house.

Aniyankuttan is relieved when Anand shows up and goes off to school. Unaware of Kalyani’s incident with Vilasini, he asks her to continue practicing for the dance competition. He suspects about the injury when he notices her limping and gets shocked seeing the burn marks. He asks Kalyani about what had happened, but she continues to hide the truth. How will Kalyani practice for the competition now? Stay tuned to find out!