In today's preview of Chembarathi, Vilasini's confronts Kalyani to ask her about her missing phone. 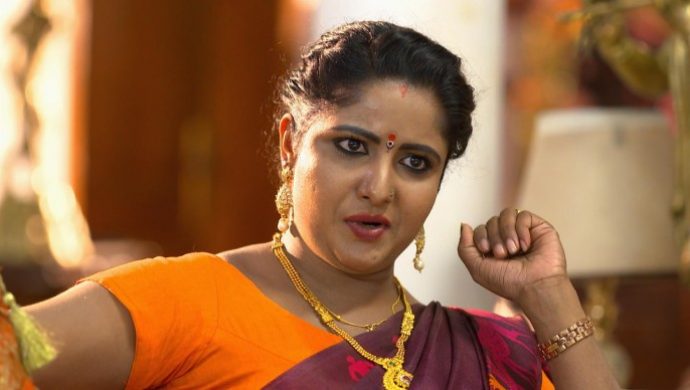 Previously on Chembarathi, Ganga feels humiliated when Aravind follows Anand’s instructions and breaks the plate. Vilasini and Jayanthi try to console Ganga and the trio suspects that Aravind’s actions were a part of Anand’s plan. Meanwhile, Kalyani realises that she has left her phone back in Thrichambarath.

Back in Thrichambarath, Vilasini approaches Akhila to propose Ganga’s engagement with Anand. Akhila gets angry and yells at them both for being doubtful of winning the competition. She reminds Ganga that, she agreed to the competition only because she insisted. Akhila tells them that the competition was announced unnecessarily and now she can’t sacrifice the company’s goodwill because Ganga is not confident.

Meanwhile, Anand ponders over what Akhila’s plans may be and he calls Kalyani to discuss the same. Unfortunately for the couple, Vilasini finds Kalyani’s phone ringing in the kitchen and plans to use it to catch them together. When Anand sees Vilasini waiting outside Kalyani’s house, he finds it suspicious. The latter figures out that he is pretending not to see her and confronts him. Meanwhile, Kalyani runs to Anand but stops short when she sees him talking to Vilasini.

In today’s preview of Chembarathi, Vilasini confronts Kalyani at her house to ask her about the missing phone. The latter is left trembling in fear when Vilasini questions her about her phone being found in the kitchen at Thrichambarath. What will be Kalyani’s answer? Stay tuned to find out!