In today’s episode of Chembarathi, Aravind is disturbed by Nandana’s unexpected return to Thrichambarath. Read the full update here 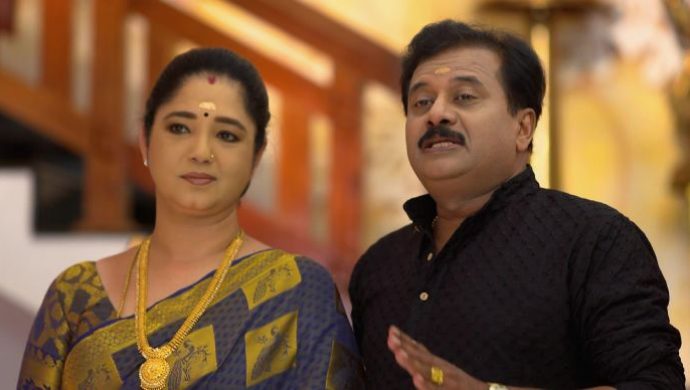 Previously on Chembarathi, Kalyani decides to not reveal Ganga’s secret to Anand as she gets scared about the consequences. She decides to hide from Anand about how she had overheard Ganga’s conversation with Priyanka as they were planning to kill Krishnan. Das gets agitated when he sees Kalyani getting out of Anand’s car after their meeting at the temple.

Das tells Kalyani that she shouldn’t be seen with Anand ever again as his marriage has been fixed with Ganga. He threatens Kalyani by saying that he will take his life along with Aniyankuttan’s if she disobeys his orders.

Later at night, Anand finds Aravind yelling out in a drunken state that hia brother owes Kalyani an apology as Akhila went back on her word. Anand tries to console him when he reveals that Krishnan slapped him. Aravind continues to criticise Akhila’s decision and curses Thrichambarath for its false pride.

In today’s episode of Chembarathi, Vilasini tells Akhila about how Aravind had come home drunk and shouted saying that he wanted to apologise to Kalyani. Vilasini further asks Anand to tell Akhila about the incidents from last night. Akhila gets angry about Vilasini’s complaints and asks Aravind to come downstairs.

Akhila is shocked when Aravind stays adamant in his opinion on her decision and continues to criticise her. Anand is agitated by Aravind’s attitude and asks him to apologise to his mother. Anand steps in to slap Aravind when he says that his mother’s decisions are not worth his apology. The family is surprised when Nandana’s father Narayanan walks into the house.

Akhila and Krishnan are happy when Narayanan apologises for the behaviour of his wife Maheshwari and daughter Nandana. He tells them that they should forgive Nandana and take her back as their daughter in law. Aravind is disturbed when Nandana walks into the house and Akhila and Krishnan accept her apologies.

Later on, Ganga meets Vilasini and Jayanthi to further discuss their plans for Thrichambarath. Ganga tells the latter that she suspects Nandana of being reformed because she has returned calmly after listening to her father. The trio further discusses their plan to lure in Nandana against Kalyani as Akhila is looking for a groom for her. Ganga also tells Jayanthi and Vilasini that she has planned to make Kalyani leave Thrichambarath before her marriage.

Meanwhile, Akhila introduces Neeraj to Kalyani and Das as her groom. Neeraj’s parents instantly like Kalyani and agree to take her as their son’s wife. Kalyani is disturbed when Das also agrees to Akhila’s decision to fix their marriage. Before they begin to leave, Akhila asks Kalyani if she liked Neeraj. What will Kalyani’s reply be? Stay tuned to find out!