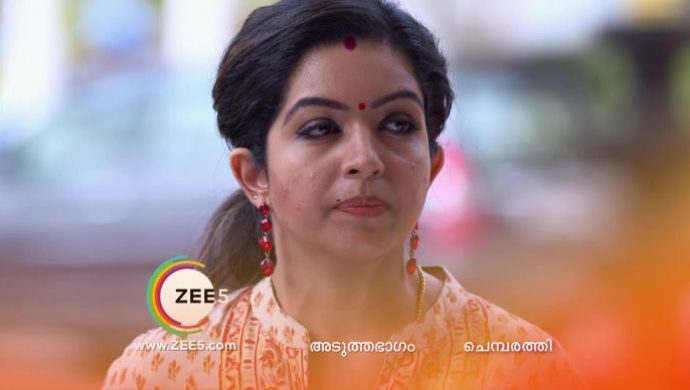 Previously on Chembarathi, Kalyani imagines Akhila shooting Ganga and later killing herself if she were to reveal Ganga’s secret to Anand. She decides to not tell Anand about how she had overheard Ganga’s conversation with Priyanka as they were planning to kill Krishnan.

Das gets angry as he sees Kalyani with Anand when they return from the temple. Das tells her that she shouldn’t be seen with Anand ever again as his marriage has been fixed with Ganga. He threatens her by saying that he will take his life along with Aniyankuttan’s if she were to disobey his orders.

Later at night, Aravind comes to Thrichambarath drunk and yells Kalyani’s name. Anand tries to console him but Aravind tells him that he owes Kalyani an apology. The latter also tells him how Krishnan had slapped him for criticising Akhila and continues to curse Thrichambarath for its false pride.

The next day, Vilasini and Jayanthi wait for Akhila to return from the temple to tell her about Aravind showing up drunk. Meanwhile, Anand meets Aravind in his room and asks him if he remembers his antics from last night. Aravind tells him that he shouldn’t love Kalyani if he is unable to be a man who can make his own decisions. Aravind asks him to leave his room as he prepares to go to the office.

In today’s preview of Chembarathi, Aravind is shocked when Nandana returns to Thrichambarath. Ganga warns Vilasini that she suspects Nandana of being reformed. The duo plans to make Kalyani leave Thrichambarath. What will be Nandana’s plans for Thrichambarath? Stay tuned to find out!

Chembarathi 13 March 2020 Written Update: Das Warns Kalyani When He Sees Her With Anand