In today’s episode of Chembarathi, Vilasini finds Kalyani’s missing phone in the kitchen and sets a trap for the couple. 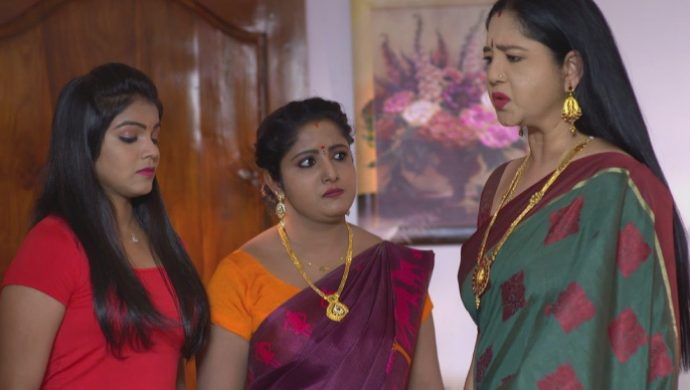 Previously on Chembarathi, Akhila stops Vilasini from demeaning Kalyani and praises her efforts. Kalyani is stopped by Anand when she tries to sneak out of the house. He asks her to make chicken fry for him and makes her go back to the kitchen. Kalyani makes the food items and prepares to leave, but she is forced to hide again because the family comes down for lunch just then.

Anand is quick to get up and leave as Ganga joins the table. The latter retaliates by asking for Akhila’s permission to have lunch from his leftovers. Anand signals Aravind to break the plate to stop Ganga. Akhila yells at Aravind when he breaks the plate while pretending to reach for food.

In today’s episode of Chembarathi, Anand is elated when Aravind follows his instructions and breaks Ganga’s plate. After lunch, Sujatha asks Kalyani to come out of the kitchen so that she can leave the house without anyone noticing. Vilasini and Jayanthi approach Ganga to console her and the trio suspects that Aravind breaking the plate was not an accident.

Meanwhile, Kalyani realises that she left her phone in the kitchen and worries about Anand calling her. Back in Thrichambarath, Ganga and Vilasini approach Akhila. Vilasini suggests that an engagement ceremony be held before Ganga’s marriage to Anand. Infuriated by their proposal, Akhila yells at the both for being doubtful of winning the competition. She reminds Ganga that, she agreed to the competition only because she insisted.

Akhila tells both that the competition was announced unnecessarily and now she can’t sacrifice the company’s goodwill because Ganga is not confident now. Meanwhile, Anand ponders over what Akhila’s plans may be and he calls Kalyani to discuss the same. However, Kalyani’s phone has been left behind in the kitchen at Thrichambarath and unfortunately for the happy couple,  Vilasini discovers the phone ringing.

Vilasini switches off the phone and waits outside Kalyani’s house to catch her and Anand together. When Anand sees Vilasini waiting outside Kalyani’s house, he suspects a trap. The latter figures out that Anand is pretending not to see her and confronts him. Meanwhile, Kalyani starts to approach Anand, but stops when she sees him talking to Vilasini. How will Anand tackle Vilasini’s sudden move? Stay tuned to find out!