Chembarathi 13 March 2020 Written Update: Das Warns Kalyani When He Sees Her With Anand

In today’s episode of Chembarathi, Kalyani gets scared of the consequences if she is to reveal the truth about Ganga. Read the full update here. 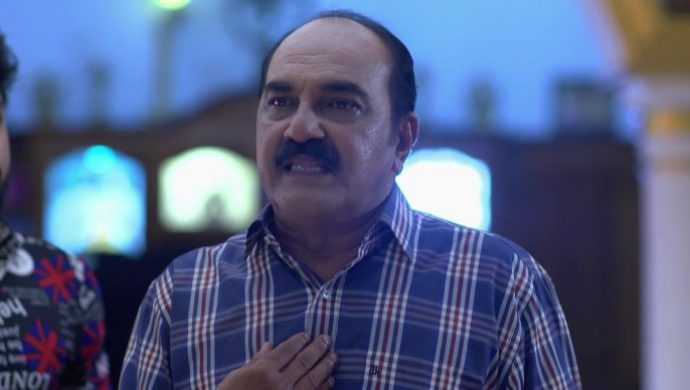 Previously on Chembarathi, Krishnan slaps Aravind when he tells him that he is ashamed of Akhila. Aravind is disheartened and asks Krishnan to make Akhila reconsider her decision. Later at night, Anand confronts Kalyani and tries to console her by telling her that he will make Akhila agree to their marriage.

Kalyani reveals how she had overheard Ganga planning to kill Krishnan. Anand gets angry at Kalyani’s revelation, rushes to Thrichambarath and calls out Ganga. Aravind and Vilasini ask him to calm down as he shouts out her name in the house. As Ganga comes out, Anand slaps her and asks her about her motives.

In today’s episode of Chembarathi, Anand continues to hurt Ganga while asking her about her real identity. Akhila and Krishnan asks him to stop but he continues to choke Ganga. Akhila takes her gun and points it at Anand when he doesn’t listen to her, asking him to stop. The latter explains how Ganga has forged her horoscope and is in Thrichambarath to kill Krishnan.

When she sees the horoscope, Akhila yells at Ganga asking about her real intentions and shoots her in the head. She shoots herself afterwards and lies dead on the floor. Kalyani replays these images in her mind and decides to not tell Anand about how she had overheard Ganga’s conversation with Priyanka as they were planning to kill Krishnan.

Das sees Kalyani getting out of Anand’s car as he drives her back to Thrichambarath. Das tells the latter that she shouldn’t be seen with Anand ever again as his marriage has been fixed with Ganga. Kalyani tells him that he has never favoured her wishes and should try to understand what she really wants. He threatens her by saying that he will take his life along with Aniyankuttan’s if she were to disobey his orders.

Later at Thrichambarath, Anand finds Aravind drunk and asks him to behave himself when he shouts out Kalyani’s name. Vilasini eavesdrops on their conversation as Aravind continues to criticise Akhila for going back on her word. He tells Anand that he owes Kalyani an apology and tells him how Krishnan had slapped him earlier. Anand tries to console Aravind but he continues to curse Thrichambarath for its false pride.

The next day, Vilasini waits for Akhila to return from the temple so that she can tell her about Aravind showing up drunk. Meanwhile, Anand meets Aravind in his room and asks him if he remembers his antics from last night. The latter tells him that he shouldn’t love Kalyani if he is unable to be a man and make his own decisions. Aravind asks him to leave his room as he prepares to leave for the office. What will be Anand’s reply to Aravind? Stay tuned to find out!