In today’s episode of Chembarathi, Akhila appreciates Kalyani’s efforts even after banishing her from Thrichambarath. 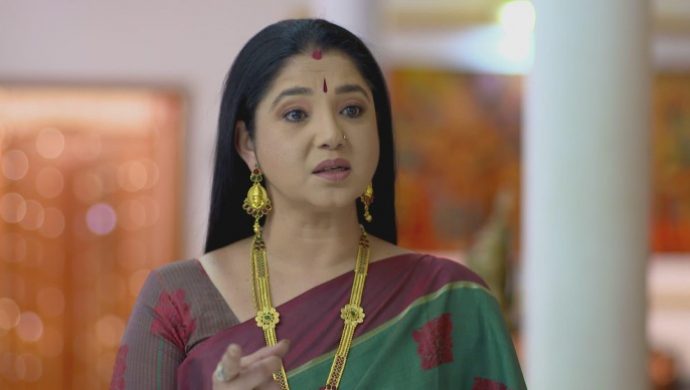 Previously on Chembarathi, Vilasini Ganga and Priyanka continues conspiring against Akhila. The trio plans on using an astrologer to turn Akhilandeshwari against Kalyani and Anand. Back in Thrichambarath, Anand approaches Kalyani to motivate her for the dance competition. Meanwhile, Ganga and Akhila come out of the house to meet the astrologer. Ganga sees Anand and Kalyani practising together, and shows it to Akhila.

Akhila yells at Anand for forgetting his status and asks Kalyani to leave. The next day, Kalyani sneaks into the kitchen at Thrichmabarath to make a medicinal Rasam for Akhila as she had noticed her coughing. Sujatha hides Kalyani when Vilasini walks in and gets into a tussle with her over the Rasam. Akhilandeshwari is surprised when Sujatha tells her about Kalyani instructing her to make the Rasam.

In today’s episode of Chembarathi, Vilasini continues complaining to Akhila about Kalyani not following her orders. The latter is delighted about Kalyani expressing her concern by making the Rasam to cure her cough. She stops Vilasini from further demeaning Kalyani and praises her for her efforts.

Kalyani gets elated when she overhears this conversation while she hides in the kitchen. As they both leave, Kalyani sneaks out of the kitchen but gets caught by Anand. He requests her to make chicken fry for him and compels her to go back to the kitchen. He later meets Aravind who also gets elated by the news of Kalyani cooking.

Aravind is quick to run to the kitchen to ask Kalyani to make pepper chicken for him. The latter makes food for them both but is stuck again as she has to hide in the kitchen again when the family comes for lunch. Anand and Aravind are elated when Sujatha gives them the food items they wanted.

Anand quickly gets up and leave when Akhila asks Sujatha to invite Ganga to have lunch with the family. Ganga notices Anand leaving and requests Akhila to let her have lunch from his leftovers. Anand signals Aravind to break his plate as Akhila agrees to Ganga’s requests. The latter acts like he is reaching for food and breaks Anand’s plate. Ganga stands up in anger while Akhila yells at Aravind for being careless.