In today’s preview of Chembarathi, Kalyani is shocked when Anand stops her before she gets out of Thrichambarath. 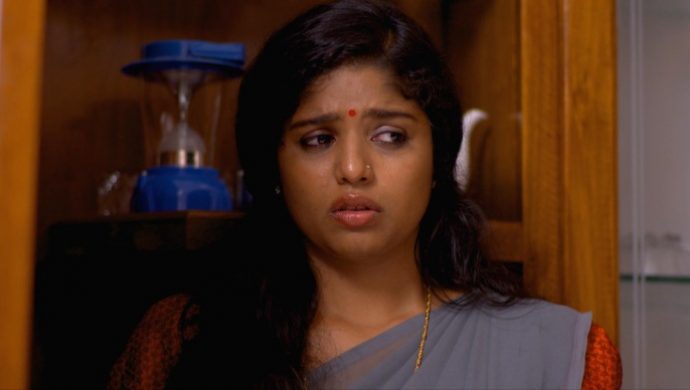 Previously on Chembarathi, Vilasini praises Priyanka for influencing the board members. The latter tells her about her next move using an astrologer to turn Akhila against Kalyani. She conspires with Ganga and Vilasini to ruin Akhila’s relationship with her sons.

Later at night, Kalyani remembers her dancing days from the past. Anand approaches and motivates her by showing video clips to help her dance. Meanwhile, Ganga and Akhila come out of the house to meet the astrologer. As they reach the car, Ganga shows the latter the sight of Anand and Kalyani practising together.

Akhila yells at Anand and asks Kalyani to leave. The next day, Kalyani sneaks into the kitchen at Thrichambarath to make medicinal Rasam for Akhila, as she had noticed her coughing. Sujatha is surprised to see Kalyani in the kitchen and reminds her of Akhila’s orders about not allowing her inside the house.

In today’s preview of Chembarathi, Ganga and Anand confront each other at Thrichambarath. Anand is seen going back to his room while Kalyani runs outside the house. Surprised at seeing her inside the house, Anand stops her. Will Ganga find Kalyani inside the house? Stay tuned to find out!

Valentine’s Day Special: Why 'Almost Single' Is A Must Watch For All Couples