In today’s episode of Chembarathi, Krishnan slaps Aravind as he tells him that he is ashamed of his mother. 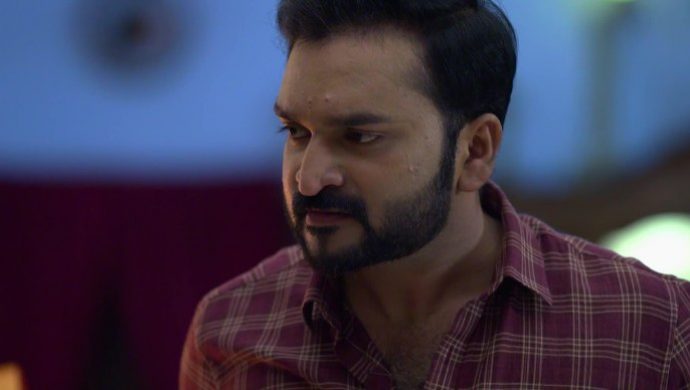 Previously on Chembarathi, Das tells Kalyani that she should be grateful to Akhila for letting her go without killing her. Kalyani is angered by Das’s comments and asks him if it was wrong of her to win the competition for Anand. She cries in front of her mother’s picture and says that she is not willing to wait for Anand.

Anand calls an employee and asks him to check Ganga’s details. Meanwhile, Vilasini and Ganga meet Priyanka to discuss their next move against Thrichambarath. Vilasini is shocked to know that Ganga’s drama with the gun in front of Akhila was orchestrated by Priyanka. Vilasini also gets surprised when Priyanka tells her that Anand is trying to find out Ganga’s real identity.

In today’s episode of Chembarathi, Aravind continues his conversation with Das and tells him how it was wrong of his mother to have gone back on her word. Krishnan slaps Aravind when he lashes out at him by saying that he is ashamed of his mother. The latter tells Krishnan to make Akhila reconsider her decision and drives off.

Meanwhile, Anand meets Kalyani at the temple and tries to console her by saying that he will marry her. Anand tells her that he already knows of a plan that is going to make Akhila change her decisions. He tells Kalyani about how he had asked a private investigation agency in Mumbai to find Ganga’s real identity. Anand further tells Kalyani about how Ganga had forged her horoscope and had lied to Akhilandeshwari about her real identity.

Anand tells Kalyani about how he overheard a conversation where Krishnan asked Akhila to reconsider her decision. Akhila tells Krishnan that she will kill herself if she finds out that her decisions were wrong. Anand tells Kalyani about his worries for his mother and how he needs to find out Ganga’s true motives. Kalyani tells him about how she had overheard Ganga planning to kill Krishnan.

Anand gets angry by Kalyani’s revelation, rushes to Thrichambarath and calls out Ganga. Aravind and Vilasini ask him to calm down as he shouts out her name in the house. As Ganga comes out, Anand slaps her and asks her about her motives. Krishnan and Akhila are seen rushing to the hall as he slaps her again. How will Ganga tackle Anand’s questions? Stay tuned to find out!