In today's episode of Chembarathi, Akhila yells at Anand for forgetting his status and practising with Kalyani. 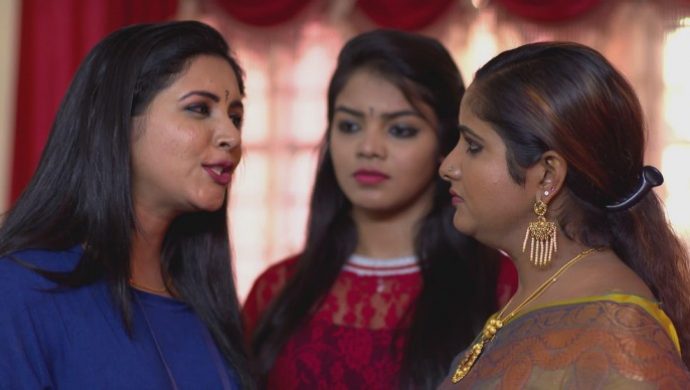 Previously on Chembarathi, Priyanka bribes the board members of the brand ambassador competition to make dancing the final event to decide the winner. Anand suspects a hidden move from Ganga and opposes the decision. Angered by Ganga’s rude comments on Kalyani, Anand challenges her to try and win the dancing event. Later on, he apologises to Kalyani for losing his temper but is surprised by her confidence in winning the competition.

In today’s episode of Chembarathi, Vilasini meets Priyanka to congratulate her for influencing the board members. As she continues praising her schemes, Priyanka tells her about her next move with an astrologer to turn Akhilandeshwari against Kalyani. She conspires with Ganga and Vilasini to ruin Akhila’s relationship with her sons by involving Kalyani.

Later at night, Kalyani remembers her dancing days from the past, unaware of Anand approaching her. As she begins to tell him about her poor dancing skills, he motivates her by showing her video clips that he downloaded to teach her how to dance. Meanwhile, Ganga asks Akhila to accompany her to the astrologer. As they reach the car outside the house, Ganga shows her Anand and Kalyani practising together.

Shocked by seeing Anand and Kalyani together, Akhila yells at him for forgetting his status. Anand retorts by saying that he was helping her only to make his company win in the competition. Akhila looks unwell, as she continues coughing while telling him to arrange for a dance master for Kalyani. She cancels the meeting with the astrologer and asks Kalyani to leave.

The next day Kalyani walks into Thrichambarath to make Rasam for Akhila to cure her cough. Sujatha is shocked to see Kalyani inside the kitchen and reminds her of Akhila’s orders to not enter the house. Sujatha quickly hides Kalyani behind the door as Vilasini comes enquiring about the special Rasam she has prepared.

Sujatha lies to Vilasini about Kalyani telling her a recipe to make the medicinal Rasam. Infuriated about Kalyani’s involvement, Vilasini orders Sujatha to throw the Rasam away in the washbasin. Sujatha apologises to the Akhila as she walks into the kitchen and tells her about Kalyani asking her to make the Rasam only to cure Akhila’s cough. What will be Akhila’s reply to Sujatha? Stay tuned to find out!

Valentine’s Day Special: Why 'Almost Single' Is A Must Watch For All Couples