In today’s preview of Chembarathi, Vilasini is shocked to learn that Ganga’s drama in front of Akhila was orchestrated by Priyanka. 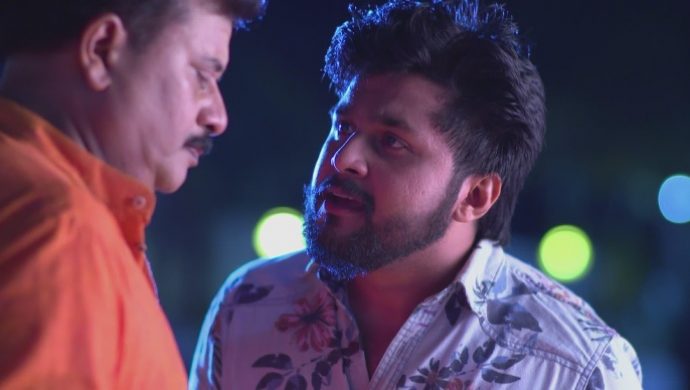 Previously on Chembarathi, Akhila tells the media reporters that she will keep her word and conduct Anand’s marriage. Krishnan takes the gun from Akhilandeshwari and asks her to calm down. The latter slaps Ganga and reminds her of how she had warned her of the consequences if she was to lose the competition.

Ganga threatens to kill herself with Akhila’s gun for being a disgrace to the family. The latter snatches the gun away from her and assures Ganga that she will only be Anand’s bride. Akhila yells at Kalyani for being selfish and destroying her family’s pride by winning the competition. As she points the gun at Kalyani to kill her, Das tells her that she is not his daughter anymore for being ungrateful to Thrichambarath.

In today’s episode of Chembarathi, Kalyani tries to stop Akhila before going to her room but gets stopped by Das. Akhila tells Das that she will conduct Kalyani’s marriage and asks him to take her home. As they get out of the house, Anand yells at Kalyani for crying and asks her about what happened inside. Vilasini gets happy when Das tells her that Akhila has fixed Anand’s marriage with Ganga.

Later at Kalyani’s house, Das tells her that she should be grateful to Akhilandeshwari for letting her go without killing her. Kalyani lashes out at him and asks him if it was wrong of her to win the competition for Anand’s business. She asks him if he never wanted her to win the competition to save the family’s pride. When Das goes inside Kalyani yells at her mother’s picture and tells her that she is unwilling to wait another lifetime for Anand.

Anand is seen at his office calling up an employee to check Ganga’s details. Meanwhile, Vilasini and Ganga meet Priyanka to discuss their next move against Thrichambarath. Vilasini is shocked to know that Ganga’s drama with the gun in front of Akhila was orchestrated by Priyanka. Vilasini is surprised to hear from Priyanka that she is worried about Anand trying to figure out Ganga’s real identity. Priyanka asks Vilasini to bring back Nandana to the story as a distraction so that they can carefully plan their next move.

Later at night, Aravind confronts Krishnan and yells at him for supporting Akhila’s decision. Aravind apologises when Krishnan warns him of his tone but continues to question the family’s pride as Akhila went back on her word. What will be Krishnan’s justification for his actions? Stay tuned to find out!