In today's preview of Chembarathi, Kalyani asks Das if it was wrong of her to win the competition for Anand's business. 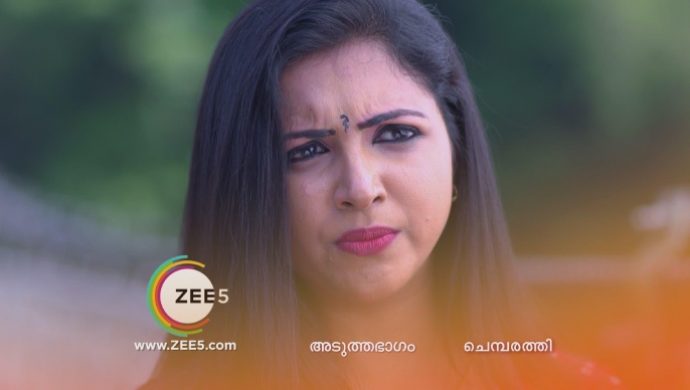 Previously on Chembarathi, Akhila is stopped on her way by media reporters who asks her questions about the dance competition. Akhila replies to them by saying that she will keep her word and will invite them if a marriage is to happen in Thrichambarath. Krishnan snatches the gun from Akhila’s hand and tries to console her as the reporters leave.

Akhila is quick to grab the gun from Ganga and embraces her. She assures Ganga that she will be her son’s bride. Jayanthi and Vilasini are elated by Ganga’s dramatic performance and congratulate her.

Akhila yells at Kalyani for being selfish and destroying the family’s pride by winning the competition. As she points the gun at Kalyani to kill her, Das tells her that she is not his daughter anymore for being ungrateful to Thrichambarath.

Krishnan asks Akhila to calm down and stops her from shooting Kalyani. Akhila decides that instead of killing Kalyani, she will find her a groom and conduct her marriage along with Anand’s marriage. As Akhila walks back to her, Kalyani calls out to her and stops her.

In today’s preview of Chembarathi, Kalyani asks Das if it was wrong of her to make Anand’s company win the competition. She is in tears when she asks him if she had put the pride of Thrichambarath at stake by winning the competition. Meanwhile, when she meets with Vilasini, Priyanka tells her about her suspicion that Anand must be trying to figure out Ganga’s real identity. How will Priyanka stop Anand? Stay tuned to find out!