In today’s episode of Chembarathi, Anand gets angry by Ganga’s rude comments and challenges her to win the competition. 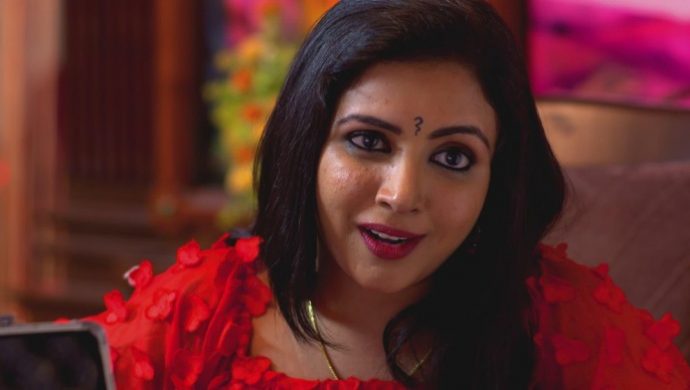 Previously on Chembarathi, Das is infuriated as Kalyani vows to win the competition. Anand comes to her rescue and explains to Das about how she is winning the title for his company. Nandana calls her mother, Maheshwari to inform her of the events in Thrichambarath. Vilasini interferes in their conversation and suspects Nandana to be hiding something from her.

Subramanian finds Kalyani sobbing as he goes to meet her and informs Anand about the same. Anand rushes to meet Kalyani and asks her the reasons for her worries. She tells him about her fear of not winning the competition as she can’t dance. Ganga eavesdrops on their conversation as Anand consoles Kalyani.

In today’s episode of Chembarathi, Anand consoles Kalyani and asks her to stay confident as she can win the competition without having to dance. Ganga is delighted to know that Kalyani can’t dance and leaves for Thrichambarath.

The next day, along with other company members, Anand, Kalyani and Ganga arrive for the brand ambassador competition’s board meeting. The board proposes an idea to include dance as an event in the competition. Anand suspects a conspiracy from Ganga’s side and strongly opposes the board’s decision. The latter starts to demean Kalyani and mocks her by proposing an idea to include a cooking competition instead.