In today's episode of Chembarathi, Ganga points Akhila's gun at Anand and blames him for her defeat to Kalyani. 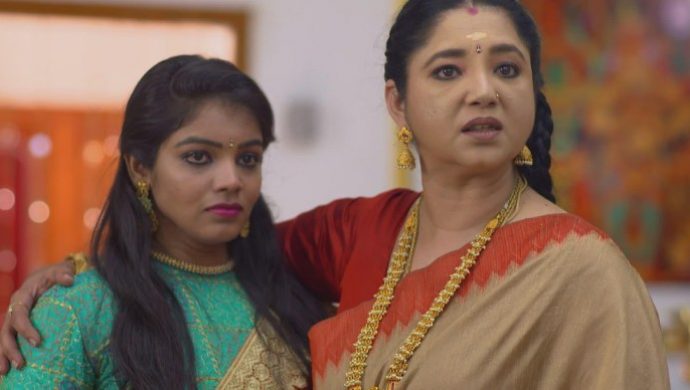 Previously on Chembarathi, Anand and Aravind start getting anxious as Kalyani doesn’t show up on stage during the dance competition. Kalyani’s leg is seen bleeding as she limps to the stage with the scorpion bite on her feet. Vilasini and Jayanthi gets disappointed when Kalyani starts dancing even with the scorpion bite.

Vilasini is relieved when Ganga assures her that Kalyani is not going to finish her performance as she has bribed the show’s host to break her bangles on stage to injure her. Even with her feet bleeding due to the injuries from the broken bangles, Kalyani continues her dance performance amusing the audience.

Meanwhile, the board members who were bribed by Priyanka tries to influence the judges but they stay adamant in making Kalyani a winner. As a doctor tends to Kalyani’s injuries, Aravind runs to the venue as the judges start to announce the winner.

Akhila grows anxious and calls Aravind to get the updates about the competition and overhears the announcement that Kalyani has won the competition. Infuriated by the news, Akhila takes a gun out of her drawer and walks out to kill Kalyani.

In today’s episode of Chembarathi, Akhila is stopped on her way by media reporters who confront her with questions related to the dance competition. Akhila replies to them by saying that she will invite them to the marriage if that is to happen at Thrichambarath. As they get back inside the house, Krishnan takes the gun from Akhila and tries to console her.

Akhila slaps Ganga as she comes to meet her after the competition. Akhila reminds her about how she had warned her of the competition and yells at her for losing to Kalyani. Ganga tells Akhila that she lost the competition because of Anand and points Akhila’s gun at him. Akhila and Krishnan are shocked at Ganga’s sudden move and shouts at her. Ganga further says that she deserves to die and tries to kill herself.

Akhila is quick to grab the gun from Ganga and embraces her. She tells the latter that she will only be her daughter-in-law and asks Anand to bring Das and Kalyani inside. Vilasini is shocked when Ganga tells her about the sudden turnout of events inside the house. Jayanthi and Vilasini are elated by Ganga’s dramatic performance and congratulate her.

Akhila yells at Kalyani for disobeying her orders and hampering her family’s pride. As she points the gun at Kalyani to kill her, Das tells her that she is not his daughter anymore for being ungrateful to Thrichambarath. Krishnan asks Akhila to calm down and stops her from shooting Kalyani. Akhila says that she will find a suitable groom for Kalyani and marry her off at the same venue as Anand’s marriage. Kalyani stops Akhila as she goes back to her room. What will be Kalyani’s reply to Akhila? Stay tuned to find out!