In today’s preview of Chembarathi, Krishnan yells at Ganga to stay back as she points Akhila’s gun at Anand. 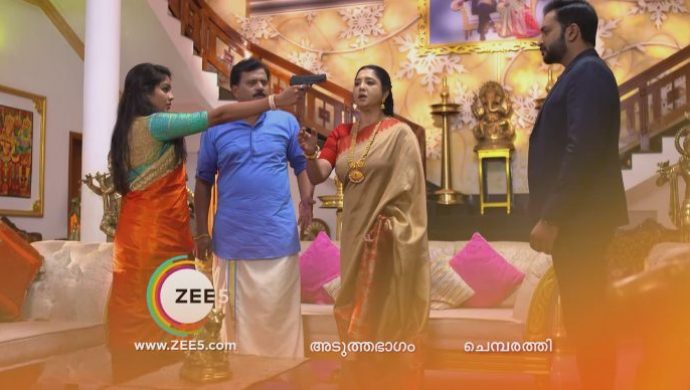 Previously on Chembarathi, Vilasini and Jayanthi tell Ganga that they have fixed a poisonous scorpion in Kalyani’s chelanka so that she won’t be able to dance in the competition. Akhila feels disturbed by the events around her and goes to the pooja room to pray for Ganga’s victory in the competition.

Back at the competition venue, Anand and Aravind start getting anxious as Kalyani doesn’t show up on stage. Kalyani’s leg is seen bleeding as she limps to the stage with the scorpion bite on her feet. Vilasini and Jayanthi get disappointed when Kalyani starts dancing even with the scorpion bite.

Ganga assures them that Kalyani is not going to finish her performance as she has bribed the show’s host to break her bangles on stage to injure her. Even with her feet bleeding due to the injuries from the broken bangles, Kalyani continues her dance performance amusing the audience.

Ganga and Vilasini are shocked by Kalyani’s determination as she finishes her performance and faints on stage. Meanwhile, the board members who were bribed by Priyanka tries to influence the judges but they stay adamant in making Kalyani win.

As a doctor tends to Kalyani’s injuries, Aravind runs to the venue as the judges start to announce the winner. Meanwhile, Akhila grows anxious and calls Aravind to get the updates about the competition and overhears the announcement that Kalyani has won the competition.

In today’s preview of Chembarathi, Akhila slaps Ganga as she is disappointed by her for losing to Kalyani. Infuriated by the humiliation, Ganga points Akhila’s gun towards Anand. Krishnan yells at her to drop the gun while Anand is shocked to see the gun pointed at him. Will Ganga shoot Anand? Stay tuned to find out!