In the next episode, a concerned Subramanian tries talking to Kalyani while Anand heads out somewhere. 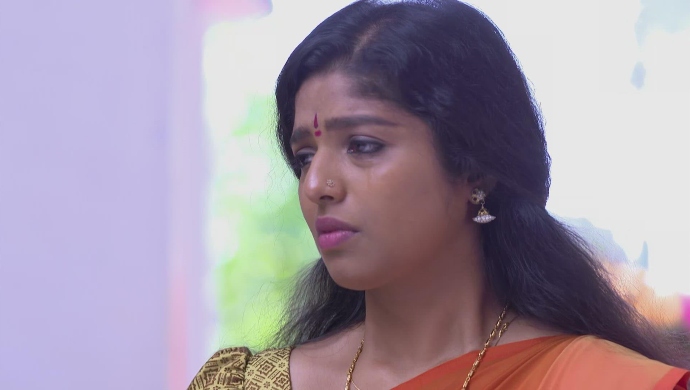 Previously on Chembarathi, Vilasini’s betrayal comes into the picture as Kalyani fails the test. This is proven by Anand to the exam controller by showing how the ink disappears after writing from the pen given by Vilasini to Kalyani. When Ganga tries to stop Anand from proving Kalyani’s innocence, he slaps her and asks her to leave. Since Kalyani was not at fault, the invigilator gives Kalyani a second chance and adds her name to the list. Back home, when Akhila tries to convince Anand based on the false notion that Kalyani failed, Anand explains to her about the betrayal and his support, which infuriates her. To know the result, Vilasini and Ganga plan a pooja, and later Aniyankuttan suggests that Kalyani do something similar.

In today’s preview of Chembarathi, we see a gloomy Kalyani sitting alone, sadly lost in her thoughts. She is shown to be crying as Subramanian comes to meet her out of concern. Since she wasn’t picking up Anand’s calls, he was asked to directly meet her in person and understand her situation. Kalyani stands there quietly, with tears rolling down her cheeks. At the same time, Anand is seen to be stepping out of the house, as Ganga looks on with curiosity, wondering where is he off to.

Why is Kalyani not answering Anand’s calls? Where is Anand off to?

V-Day Special: Check Out These Ideas From Akhilandeshwari For A Five Course Vegan Meal