Will Kalyani be forced to marry Chandrapratap or will she get saved somehow? To find out, read the rest of the story. 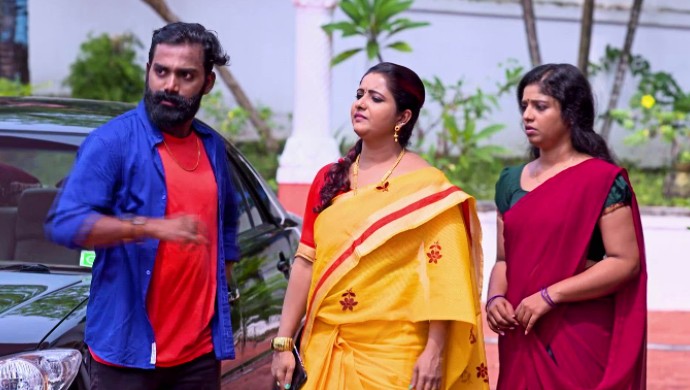 In the previous episode, we saw an angry Kalyani tell her father that she will be marrying Chandrapratap the next day at the registrar’s office and that Vilasini will be conducting the wedding. Akhila, meanwhile, regretting that she slapped a drunk Anand goes to his room to cheer him up and ask him to accompany her for an event. She also mentions that he must travel to Mumbai to meet somebody.

The current episode opens with Kalyani going to Anand’s room to give him his morning tea and Aravind waylays her after that and curses her again for turning his brother into an alcoholic. Upset, Kalyani runs into the kitchen. Vilasini then comes and asks her why she hasn’t asked Akhila permission to go shopping, which would be their excuse to go to the registrar’s office. She forces her to ask Akhila for permission and offers to go along with Kalyani and Chandrapratap as they must not be seen alone together in public before marriage. As they set out, Anniyan kuttan comes running saying Dasan has collapsed. They rush to the outhouse where he is lying in bed unwell. Vilasini tries to get Kalyani to leave after ascertaining first from Dasan that he is feeling better, but sends Vilasini packing saying that she cannot leave her father in this state. After Vilasini and Chandrapratap leave, Das confides in his daughter that all his illness was pretense to prevent her from marrying Chandrapratap that day. Next time they make this plan, he told her, we will come up with something else at that. Later that morning, at breakfast, Akhila tells Kalyani that she must not serve food to the family any more.

If you’re watching the series for the first time, here’s what you need to know. Anand, a rich business scion and his household cook, Kalyani, develop feelings for each other. However, his mother Akhilandeshwari, who is also the matriarch of the family is uneasy about this union as she has different notions of the wealth and status of her prospective daughter-in-law. She arranges for Kalyani to be married off to Chandrapratap. However Akhila changes her mind when Chandrapratap stumbles home roaring drunk after having caused a scene on the road, misbehaved with Sujatha, the head cook and nearly getting beaten up the locals. However, Kalyani insists that she will still marry him in order to help upkeep Akhila’s promise. Her decision upsets Anand who walks out and gets drunk.

Sathya Enna Penkutty Actress Jumped Off A Rooftop And Gave Us All A Scare!