In today's episode of Chembarathi, Akhila takes out a gun from her drawer as she gets agitated by the final results. 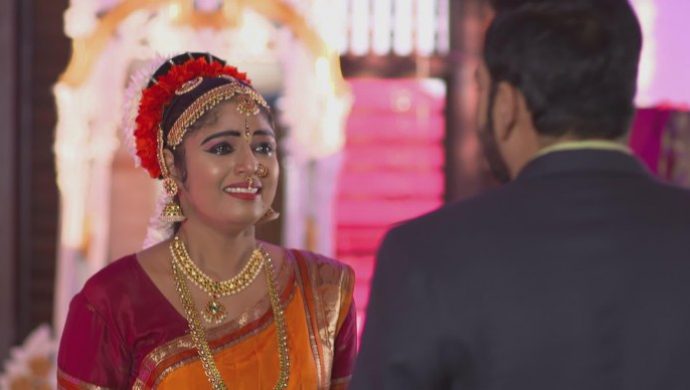 Previously on Chembarathi, Anand is relieved when Das comes back with his car. He finds Kalyani hiding in the back seat of the car and prepares to leave but is stopped by Jayanthi who accompanies Anand to the dance venue. On the way to the venue, Jayanthi’s questions about the perfume in the car irritate Anand.

When Jayanthi spots Kalyani at the venue, she suspects her of lying about she coming directly from the dance school. Vilasini tells Jayanthi that she was right to suspect Kalyani to be hiding in Anand’s room. The latter is shocked to hear Vilasini’s plan to defeat Kalyani in the competition.

Meanwhile, Akhila meets Guruji at the temple and tells him about her worries. He suggests that she do a pooja by wrapping saffron and turmeric in the paper. He tells her if she prays and finds saffron in the paper, Ganga will win the competition, thus saving her family pride.

In today’s episode of Chembarathi, Akhila comes back to Thrichambarath from the temple and goes to the pooja room as she feels uneasy about Kalyani winning the competition. She asks Krishnan to not disturb her and continues to pray for Ganga to win the competition.

Back at the competition venue, Anand and Aravind start getting anxious as Kalyani doesn’t show up on stage even after the host repeatedly calls out her name. Vilasini and Jayanthi are elated and tells Ganga that Kalyani is not going to perform on stage as they have fixed a poisonous scorpion in her Chilanka. Kalyani’s leg is seen bleeding as she limps to the stage with the scorpion bite on her feet.

Vilasini and Jayanthi are shocked as Kalyani comes on stage and starts dancing. Ganga assures them that Kalyani is not going to finish her performance as she has bribed the show’s host to break her bangles on stage to injure her. Even with her feet bleeding from the injuries due to the broken bangles, Kalyani continues her performance amusing the audience. Vilasini, Jayanthi and Ganga are shocked by Kalyani’s determination as she finishes the performance and faints on stage.

After the performance, Anand spots the injuries on Kalyani’s feet and wants her to the hospital. However, Kalyani insists on waiting until the final results are announced of the competition, so Aravind summons a doctor to the venue instead . Meanwhile, the board members who were bribed by Priyanka try to influence the judges but they remain adamant about declaring Kalyani the winner.

While the doctor tends to Kalyani, Aravind runs to the venue as the judges start to announce the winner. Akhila grows anxious and calls Aravind for updates from the competition and overhears the announcement that Kalyani has won the competition. Vilasini and Ganga are shocked by the revelation of the result.

Hearing the same, Anand and Kalyani embrace each other in happiness. Back at Thrichambarath, an infuriated Akhilandeshwari takes out a gun from her drawer and walks out of the house. Krishnan sees the competition’s result on the news and follows to stop her. Is Akhila going to kill Kalyani? Stay tuned to find out!