Chembarathi 09 March 2020 Preview: Akhila Takes A Gun Out Of Her Drawer 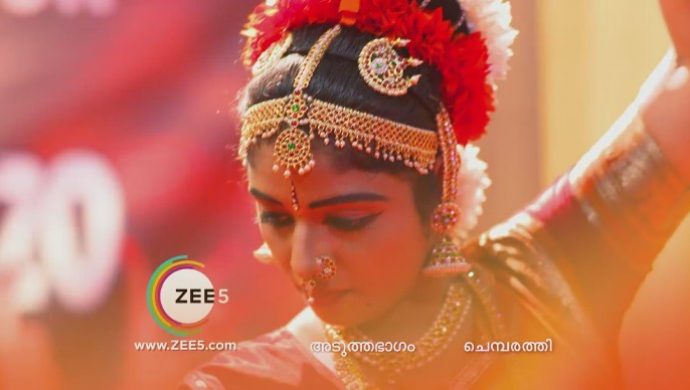 Anand drops Jayanthi at the venue and while parking the car asks Kalyani to pretend to be coming back from the dance school. When Jayanthi spots Kalyani at the venue, she suspects her of lying about coming from the dance school as she finds a scent similar to the one in the car on her. She is quick to tell Vilasini about her suspicions as she arrives with Ganga for the competition.

Vilasini tells Jayanthi that her suspicions about Anand hiding Kalyani in the room was right and how he fooled them both. Vilasini discusses a plan to stop Kalyani from winning the competition, but Jayanthi is shocked to hear about the same.

Meanwhile, Akhila meets Guruji at the temple and tells him about her worries. He suggests her to do a pooja by wrapping saffron and turmeric in the paper. He tells her if she should pray and select the paper with saffron, Ganga will win the competition, thus saving her family pride.

In today’s preview of Chembarathi, Vilasini and Ganga are seen surprised by Kalyani’s dance performance in the competition. Akhila is seen praying for Ganga’s victory and taking a gun out of her drawer. Why is Akhila taking her gun? Who will win the dance competition? Stay tuned to find out!

Akhilandeshwari a.k.a Aishwariyaa of Chembarathi Gets Candid About Her Shift To Veganism