In today's episode of Chembarathi, Anand manages to get Kalyani out of Thrichambarath by fooling Vilasini. 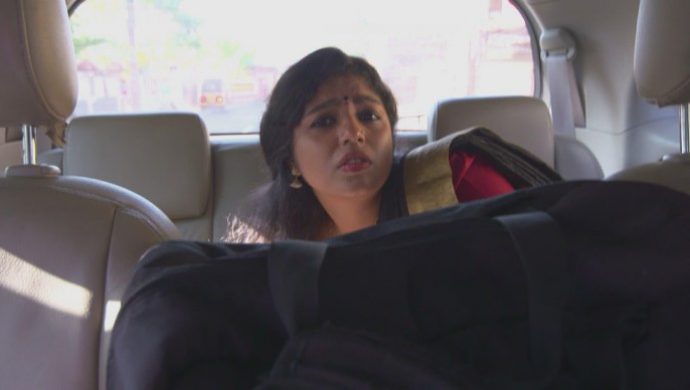 Anand finds Vilasini and Jayanthi waiting downstairs for Ganga while he looks for a way to get Kalyani out of Thrichambarath. Akhila comes out of her room and tells the group gathered that she is going to pray for Ganga to win the dance competition. Anand retorts to her by saying that he is sure of his mother not praying for him to lose the competition.

In today’s episode of Chembarathi, Anand asks Kalyani to wear a saree similar to the one Jayanthi is wearing so that he can sneak her out of the house. Anand plans to make Jayanthi walk in front of Vilasini unnecessarily so that Kalyani can sneak out without getting noticed. Anand calls Jayanthi upstairs and asks her to bring him some hot water.

As Jayanthi goes to the kitchen Vilasini stops her and asks her why Anand called her. After drinking water Anand asks Jayanthi to bring him tea. The latter goes downstairs again and takes tea upstairs in a tray. As she gets the tea, Anand asks her to keep his laptop in Aravind’s room. As she goes to Aravind’s room, Anand asks Kalyani to hide her face with the tray and leave the room to his car parked outside.

Vilasini stops Kalyani on her way out thinking that she is Jayanthi and asks her to make Das buy jasmine flowers for Ganga. Kalyani sneaks out and hides in Anand’s car but is shocked when Vilasini asks Das to take the car to buy her flowers. When Vilasini walks inside the house she is shocked to find Jayanthi coming back from Aravind’s room. She asks Jayanthi about how she had seen her twice and suspects Anand to be hiding something.

Anand gets angry when he finds his car to be missing and calls up Das to bring it back. Anand figures out that Kalyani is hiding in the car from his conversation with Das. As he waits for Das to bring the car back, he gets startled when Vilasini asks him about Kalyani. What will be Anand’s reply? Stay tuned to find out!