Chembarathi 06 March 2020 Preview: Vilasini Stops Kalyani As She Tries To Get Out

In today's preview of Chembarathi, Kalyani wears a saree similar to Jayanthi and tries to sneak out of Thrichambarath. 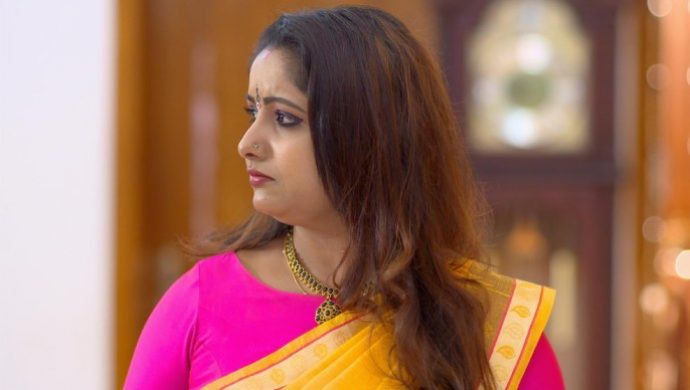 Previously on Chembarathi, Anand consoles Kalyani by telling her that he had instructed Aravind to go to Aniyankuttan’s school with birthday gifts for him. Kalyani is elated when Anand tells her that he has complete trust in her winning the dance competition the next day.

The next day, Anand is seen anxious as he tries to find a way to get Kalyani out of Thrichambarath for the competition. Aravind and Subramanian offer to help but Anand tells them that he will find a way by himself.

In today’s preview of Chembarathi, Kalyani tries to sneak out of the house for the competition without Vilasini and Jayanthi noticing. She tries to hide her face with a plate and is seen wearing a black saree similar to Jayanthi. Thinking that it’s Jayanthi walking out of the house, Vilasini stops her. How will Kalyani leave Thrichambarath now? Stay tuned to find out!