In today’s episode of Chembarathi, Anand is shocked to find Kalyani lying uncouncious in the washroom . 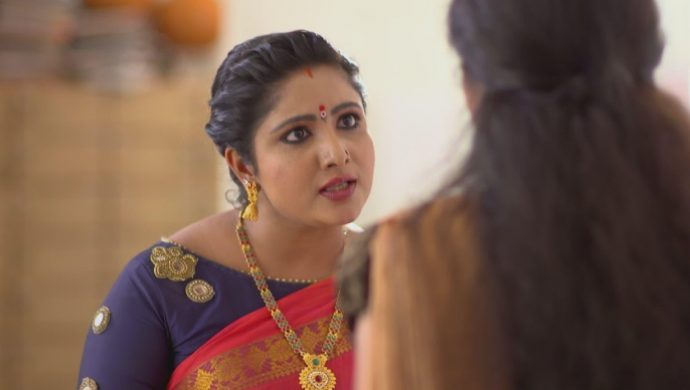 Previously on Chembarathi, Vilasini offers her help to Ganga as her discussion with Priyanka continues. Kalyani confronts Ganga and asks her why she lied about Anand slapping her. The latter starts demeaning her by calling her a servant and mocks her lack of education. Infuriated by her comments, Kalyani challenges her and tells her that she will win the competition to marry Anand.

Vilasini catches Ganga lying about Priyanka and offers her help in her plans against Akhilandeshwari. She offers her a gold ring as a welcome gift and further plans to defeat Kalyani in the competition. As they prepare to leave for the competition, Ganga touches Akhila’s feet for her blessings.

In today’s episode of Chembarathi, Krishnan and Akhilandeshwari bless Ganga as she touches their feet. As Vilasini and Ganga go to their car, Anand requests Akhila to bless Kalyani also. The latter refuses to do the same and tells him that she values her family more than her business affairs. As Akhila and Krishnan goes in, Kalyani touches her footwear for blessings, which elates Aravind and Anand.

When Ganga reaches the exam centre, she meets her henchman and instructs him to pour juice over Kalyani to make her go to the washroom. Kalyani complains to Anand when Ganga’s henchman pours juice over her. Infuriated by the same, Anand slaps him and asks him to leave. As Kalyani goes to the washroom to freshen up, Ganga throws a smoke grenade to suffocate her and locks her inside.

Kalyani starts suffocating and cries for help as she finds the door locked. She faints after a while, as no one comes for her help. Anand finds it strange that Kalyani is taking too long in the washroom and is shocked to find her unconscious. He wakes her up and directs her to the exam hall.

Ganga feels agitated as her plan fails and complains to Vilasini. When Kalyani walks inside the exam hall, Vilasini offers her a pen as she is seen empty handed. Ganga gets suspicious of Vilasini’s move and asks her about the pen. The latter tells Ganga about the special disappearing ink in the pen that will ruin Kalyani’s exam if she writes her answers with the same. How will Kalyani tackle Vilasini’s move?