Chembarathi 05 March 2020 Written Update: Kalyani Tries To Sneak Out For The Competition

In today's episode of Chembarathi, Vilasini and Ganga meet Priyanka to discuss about the dance competition. 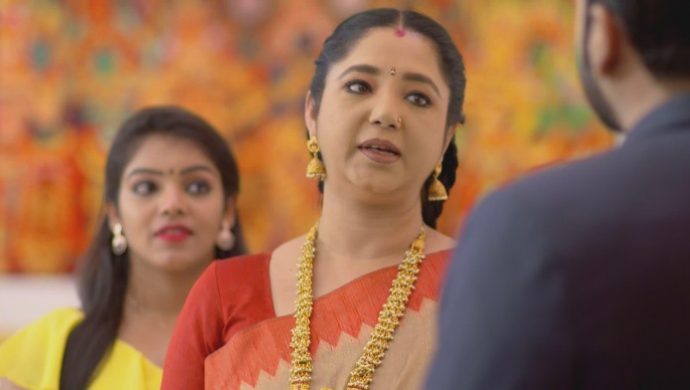 Previously on Chembarathi, Kalyani tells Anand about her worries for Aniyankuttan as it is his birthday. Anand asks Kalyani to continue with her practice and calls Aravind to help him. The latter follows Anand’s instructions and surprises Aniyankuttan in his school. Aniyankuttan gets elated when he sees the gifts and thanks Aravind.

Later at night Ganga and Kalyani continue their practice for the competition. As Anand comes back from the office, Vilasini asks Ganga to make sure that he sees her practising. Anand ignores them both and goes to his room to meet Kalyani. She tells Anand about her worries as she missed Aniyankuttan’s birthday and starts crying.

In today’s episode of Chembarathi, Kalyani continues to tell her worries for Aniyankuttan to Anand. She tells him how Aniyankuttan is like a son to her as their mom passed away when they were young. Anand tells her that he had asked Aravind to get him gifts and it was one of his best birthdays ever. Kalyani is elated when Anand further tells her that he has complete trust in her winning the competition the next day.

Meanwhile, Das is disheartened when Aniyankuttan reminds him that it was his birthday. The latter tells Das about Aravind getting him gifts and sweets to his school. Das tells him how Thrichambarath family is generous to them and Kalyani is trying to take advantage of their huge heart.

Elsewhere, Vilasini and Ganga meet Priyanka to tell her about their worries for Kalyani winning the competition. Vilasini tells them both Kalyani shouldn’t be underestimated because she is in the competition for Anand and she has already shown her talent during the exams. Priyanka asks Ganga to win the competition by hook or crook so that they can destroy Thrichambarath.

Anand finds Vilasini and Jayanthi waiting downstairs for Ganga for the competition. When Akhila comes out, she tells the group gathered that she is going to the temple to pray for Ganga to win the competition. Anand retorts to her by saying that he is sure of his mother not praying for him to lose the competition.

Ganga comes out of her room and touches Akhila’s feet for her blessings. The latter asks her to win the competition and goes to the temple. Vilasini gets tired of waiting for Ganga as she goes to her room again. Meanwhile, Anand and Kalyani wait for Ganga to leave so that they can leave for the competition.