Chembarathi 05 March 2020 Preview: Anand Thinks Of A Way To Get Kalyani Out Of His Room

In today's preview of Chembarathi, Kalyani finds Anand anxious about getting her out of Thrichambarath without the family noticing them. 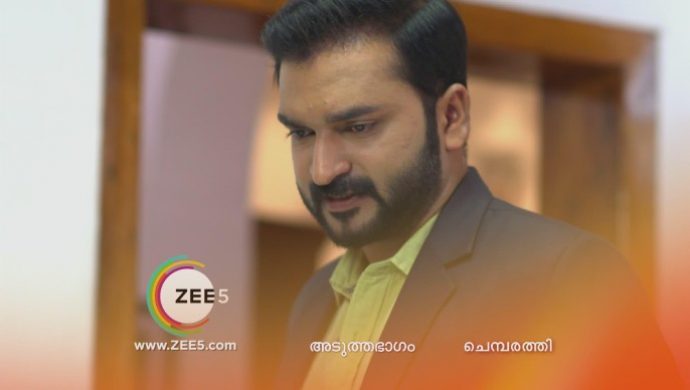 Previously on Chembarathi, Anand tells Kalyani that Ganga has challenged him to the dance competition by sending him the video of her dancing. Kalyani promises him that she will win the competition and asks him to share the video with her so that she can get motivated watching her competitor dance.

As Kalyani continues her practice for the competition, she remembers that it’s Aniyankuttan’s birthday. She gets worried about Das’s forgetful nature and calls Anand to remind him about the same. Anand asks Kalyani not to worry and calls Aravind to help him.

Meanwhile, Aniyankuttan is sad at school as Das forgets that it’s his birthday and goes off for work early. Aravind goes to Aniyankuttan’s school with sweets and gifts for him as per Anand’s instructions. The latter is surprised to see Aravind at his school and gets happy by the gifts.

Later at night, Ganga and Vilasini continue with their dance practice outside Thrichambarath. Vilasini asks Ganga to make sure that Anand sees her practice but gets disappointed when he ignores them and goes to his room. While having dinner, Kalyani tells Anand about her worries as she missed Aniyankuttan’s birthday.

In today’s preview of Chembarathi, Kalyani asks Anand what he is thinking about as he seems anxious. He tells her that he is thinking of a way to get her out of Thrichambarath without any of the family members seeing them. What will be Anand’s plan? Stay tuned to find out!