Vilasini gets scared when Sreeni reveals his plans about Das’s murder. Will he be able to succeed? Scroll down to know more. 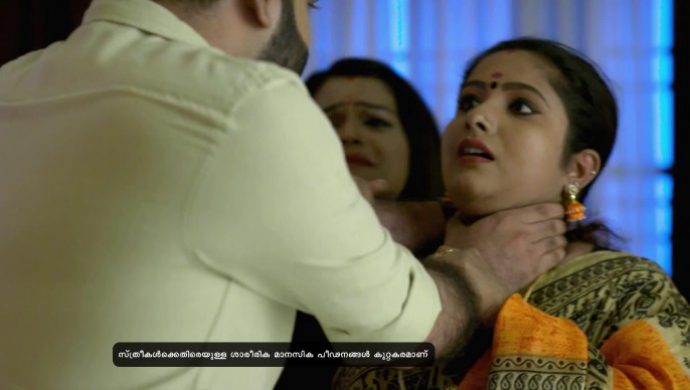 Previously on Chembarathi, Anand lashes out at Vilasini for questioning him about Nandana. Neeraj’s surprise visit to her house annoys Kalyani. She tells him that she doesn’t like his frequent visits to her house. Ganga gets annoyed by Jayanthi’s questions and threatens to kill her. Vilasini meets Ganga’s cousin brother Sreeni who reveals about his plan to kill Das to remove Kalyani from Thrichambarath.

In today’s episode of Chembarathi, Sreeni continues his discussion about eliminating Das and Kalyani’s removal from Thrichambarath. Vilasini agrees to their plans when Sreeni tells her that they have to kill him before Akhila’s return. Meanwhile, Kalyani prays in front of her mother’s picture as she is disturbed by Neeraj’s constant visits. As she tells her mother that she is unable to see someone else other than Anand as her husband, Das walks into the room.

Das is shocked to listen to Kalyani’s complaints to her mother. He stops Kalyani and apologizes to her for not being kind. He also reminds her that he is helpless in this situation as he has always stood by Thrichambarath. Meanwhile, Sreeni continues to plan Das’s murder with Vilasini and Ganga.

Vilasini is shocked when she gets to know that Sreeni is planning to frame Kalyani for Das’s murder. Vilasini suggests to him that he should leave Thrichambarath before someone sees him. Vilasini looks worried and looks at Ganga who seems determined to go by Sreeni’s plans. Later at Thrichambarath, Vilasini and Jayanthi join Nandana at the dinner table.

Vilasini starts brainwashing Nandana again by telling her that Kalyani is the reason for her failed marriage. Nandana keeps quiet throughout the conversation and tells Vilasini before leaving that she should worry about herself.

Vilasini gets worried about Nandana yet again and wonders why the latter is distancing from her? As Vilasini prepares to sleep, Ganga comes to her room and talks about Kalyani. Vilasini is shocked when Sreeni also joins the discussion. Suddenly Anand walks into the room when Ganga reveals to both that Akhila should be the next one to get killed. As Anand hears them conspiring together, he approaches Vilasini and strangles her. Vilasini suddenly wakes up from her sleep and realises that it was just a nightmare.

The next day Vilasini along with Jayanthi join Anand and Aravind at the breakfast table. When Aravind notices Vilasini is sitting in Akhila’s place, he asks her to vacate the spot. Vilasini reminds him that she is the one in power now during Akhila’s absence. Anand intervenes and yells at Vilasini which reminds her of the nightmare. What will be Vilasini’s reaction? Stay tuned to find out!