In today’s preview of Chembarathi, Ganga humiliates Kalyani for trying to win the competition. 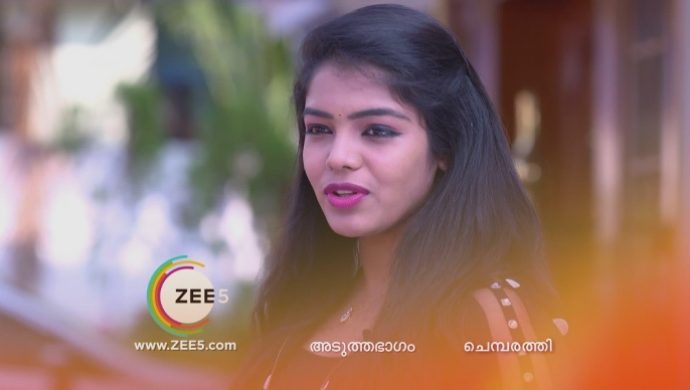 Previously on Chembarathi, Anand stands helpless as Akhila and Krishnan believe Ganga’s lies. He tells Kalyani about the same and both suspect Ganga to be hiding her true motives. Kalyani is worried as she asks Anand the reason behind Akhila introducing Ganga as a suitable bride for him.

Vilasini is disturbed by Ganga’s presence in Thrichambarath and goes to meet Priyanka to update her of the events in Thrichambarath. She starts suspecting Priyanka of hiding something from her and quickly checks her phone as she goes to the kitchen. Vilasini is shocked to find pictures of Ganga and Priyanka on the phone.

As soon as Priyanka returns from the kitchen, Vilasini confronts her with her doubts. Priyanka initially lies, but later reveals that Ganga is her sister. Vilasini is shocked to hear about how Priyanka bribed Akhila’s trusted matchmaker to introduce Ganga into Thrichambarath.

In today’s preview of Chembarathi, Ganga confronts Kalyani and starts intimidating her. She asks whether she knows about the questions in the competition and mocks her for not knowing English. She continues to ridicule her for trying to win the competition with her lack of education. What will Kalyani’s reply to her comments be?