In today's preview of Chembarathi, Kalyani is seen practicing rigorously outside Thrichambarath for the dance competition. 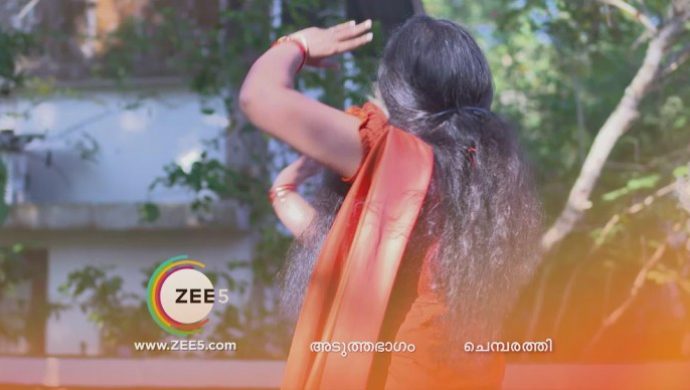 Previously on Chembarathi, Anand tells Kalyani that it is hard to make Akhila understand the truth about someone after she starts trusting them. He tells her that the only way for them to get back at Ganga is by winning the competition.

Vilasini starts suspecting that Kalyani is hiding in Anand’s room and thinks of a way to catch the couple red-handed in front of Akhila. She spots Ganga talking on the phone and overhears her conversation about her failed plan to kill Krishnan. Vilasini is shocked by her real motives and asks her to be careful as Ganga is different from her sister Priyanka.

Later on, Vilasini starts to criticise Ganga for her careless attitude towards the competition as she continues to talk on the phone. Vilasini further complains to Akhila that Kalyani must be practicing in the dance school to win the competition while Ganga is wasting time on her phone. Akhila gets happy when Ganga shows the family her dancing skills. Ganga asks Jayanthi to record a video of her dancing so that she can share it with Anand.