In today’s episode of Chembarathi, Kalyani tells Neeraj that she doesn’t like his frequent visits to her house. Scroll down to read more. 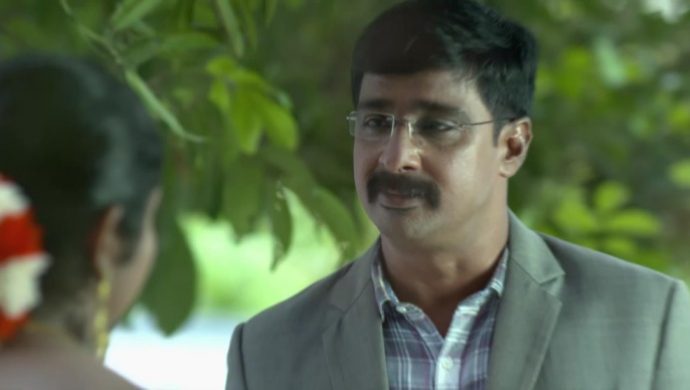 Previously on Chembarathi, Anand intervenes between Nandana and Aravind. Vilasini’s plan to console Nandana fails when the latter asks her to mind her own business. Aravind asks Anand to stop requesting him to compromise in his relationship. Aravind gets irritated by Nandana’s phone call at night and sleeps at Anand’s room.

Anand goes to Nandana’s room to try and console her but the latter lashes out at him. Nandana holds his relationship with Kalyani responsible for problems in her life. She tells him that Aravind cares more about Anand’s relationship than her life. Vilasini who comes to check on Anand is shocked when she sees him coming out of Nandana’s room.

In today’s episode of Chembarathi, Anand is surprised to see Vilasini waiting for him outside Nandana’s room. Vilasini questions Anand about the reason behind meeting Nandana during an odd time. Anand gets angry at Vilasini’s narrow-mindedness and yells at her.

The next day, Neeraj visits Das and Kalyani at their house. Das asks Kalyani to prepare tea for him but she gets disturbed by his visit. Making matters worse, Anand calls Kalyani on her phone. Das sees the name Ettan displaying on Kalyani’s phone and declines the call. He leaves Neeraj and Kalyani alone to talk.

Kalyani tells Neeraj that she doesn’t like his frequent visits to her house. When Neeraj requests for her number, she politely declines. Later, Jayanthi sees Ganga coming back to Thrichambarath and decides to show off her power. Ganga calls Jayanthi and Vilasini a parasite when she gets irritated by her(Jayanthi ‘s) questions. She threatens to kill her if she ever tries to disrespect her again.  Ganga’s comments make Jayanthi angry and she complains to Vilasini about the same.

Ganga apologises to Vilasini and praises her extravagant looks. She introduces Vilasini to Sreeni, Ganga’s cousin; who is helping her in planning to conspire against Thrichambarath. Sreeni tells Vilasini about his elaborate plan to remove Kalyani from Thrichambarath. Vilasini gets shocked when Sreeni reveals that he is planning to kill Das before Akhila’s return. Who will save Das now? Stay tuned to find out!