In today’s preview of Chembarathi, Vilasini asks Anand why is he meeting Nandana when Aravind is sleeping in his room. Scroll down to read more. 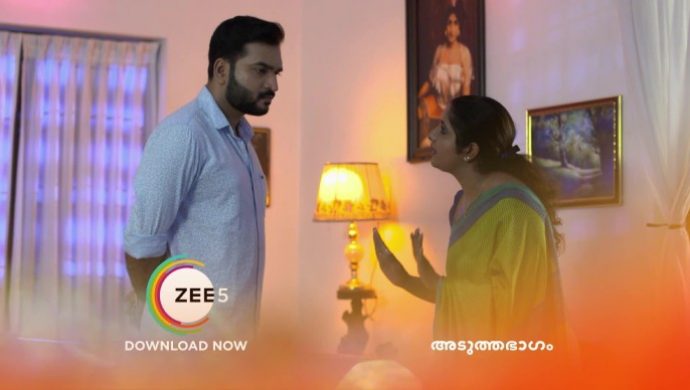 Previously on Chembarathi, Anand intervenes between Nandana and Aravind as they start fighting with each other. Vilasini tries to sympathize with Nandana but gets disturbed when she asks her to mind her own business. Aravind asks Anand to stop requesting him to compromise on his relationship with Nandana.

Later at night, Aravind gets irritated by Nandana’s phone conversation with her mother. He leaves the room in anger when she tells her mother that she feels suffocated to live in Thrichambarath. Aravind goes to Anand’s room and asks for his permission to sleep there. Anand figures out that both have fought again and goes to meet Nandana.

Anand’s move to console Nandana fails when she holds him responsible for her failed marriage. She tells him how Aravind cares more about his brother’s relationship than her. Anand feels sad by her comments and leaves the room. Meanwhile, Vilasini who comes upstairs to check on Anand is shocked to see him coming out of Nandana’s room.

In today’s preview of Chembarathi, Vilasini questions Anand’s intentions in entering Nandana’s room. Anand gets shocked when Vilasini asks him about the reason for Aravind sleeping in his room. Neeraj is seen visiting Kalyani and Das at their house. When Anand calls Kalyani, Das is confused to see the name Ettan on her phone. What will be Das’s reaction when he finds out that it is Anand calling her? Stay tuned to find out!