In today’s preview of Chembarathi, Vilasini is shocked to find pictures of Priyanka and Ganga together. 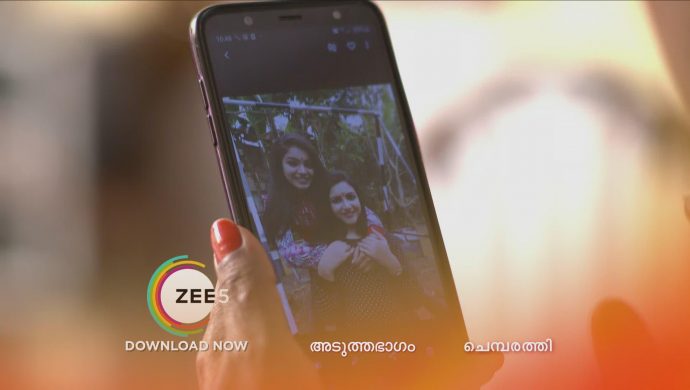 Previously on Chembarathi, Anand comes back home after having dinner with Kalyani and Vilasini watches Ganga approach Anand while he is busy on a phone call. Ganga starts explaining how she had prepared lunch for him but Anand walks away as she continues talking. Ganga then tries to get his attention again but gets slapped by Anand as he feels irritated with her constant requests.

Vilasini feels elated when Ganga gets slapped by Anand and continues to eavesdrop on their conversation. Infuriated by Anand’s reaction, Ganga drives off to meet Priyanka. The latter tells her about leaving Thrichambarath, but is reminded of their true motives. Priyanka then asks her to improvise her plan against Akhila and Thrichambarath.

Kalyani is scared when Anand tells her about slapping Ganga. She reminds him of the repercussions of his actions and asks him to be careful of Akhila’s reaction to the same. Anand acts confident and asks Kalyani to listen to his conversation with Akhila on the phone. To Anand’s shock, Ganga lies to Akhila about the events and tells her about him gifting her a diamond ring. Vilasini grows curious about Ganga’s actual motives.

In today’s preview of Chembarathi, Vilasini is shocked to find pictures of Ganga and Priyanka. As she scrolls through Priyanka’s phone, she finds more pictures of them together. Will she tell Akhila about what she saw? Stay tuned to find out!

If you are new to the show, here’s what you need to know. Kalyani is a village girl, who works as a household cook for the wealthy Thrichambarath family. Eventually, she falls in love with Anand, the eldest son of Akhilandeshwari. The matriarch of the family, Akhilandeshwari’s notions of wealth and pride keep Kalyani and Anand from disclosing their relationship to the family. The story evolves as Kalyani becomes a part of the evil game played by Akhila’s relatives to destroy the family.