In today’s episode of Chembarathi, Anand fails to console Nandana when she holds him responsible for ruining her marriage. Scroll down to know more. 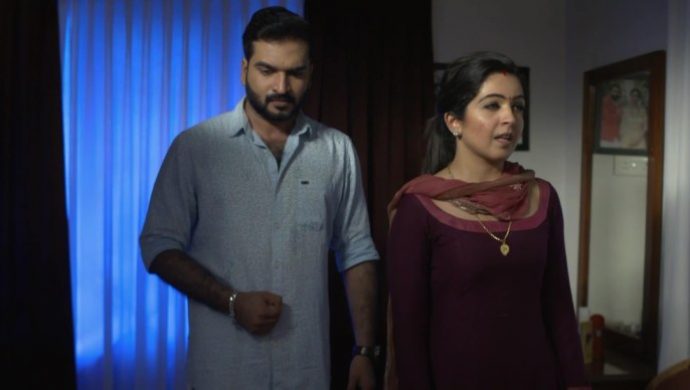 Previously on Chembarathi, Vilasini starts misusing her powers in Akhila’s absence. She tells Kalyani that she is in power and asks her to do a hundred squats in penance for her past mistakes. Anand’s timely intervention saves Kalyani and he also warns Vilasini to stop her actions. Kalyani gets sad when she learns that Akhila has gone for her pilgrimage to pray for Anand’s marriage with Ganga.

Back at Thrichambarath, Nandana stops Aravind as he returns from work. She complains to him about how he is trying to avoid her. When Nandana tells him that he is not worthy of being Akhila’s son, Aravind grabs her hand to hurt her.

In today’s episode of Chembarathi, Anand stops Aravind from hurting Nandana. He takes him away from Nandana for a while. Vilasini, who overheard the conversation between Aravind and Nandana decides to use the opportunity by pretending to sympathize with her. Vilasini gets angry when Nandana tells her to fix the problems in her life before offering advice to anyone and walks away.

Anand tells Aravind to calm down and start compromising in his relationship instead of giving up on it. Aravind informs Anand that Nandana is secretly conspiring against him in the dark. When Anand insists on him trying again, Aravind walks off in anger. Later at night, Vilasini joyfully tells Jayanthi about Aravind’s fight with Nandana. Jayanthi gets irritated when Vilasini begins to show off her power.

Anand gets a call from Kalyani and both have a conversation. Anand is surprised to notice that Kalyani has started talking more openly to him. Meanwhile, Aravind gets angry when he overhears Nandana’s conversation with her mother. He leaves the room when Nandana tells her mother that she feels suffocated while living in Thrichambarath.

Aravind goes to Anand’s room and seeks his permission to sleep there. Anand figures out that he has fought with Nandana again and goes to meet her. Nandana lashes out at Anand when he tries to console her; she holds his relationship with Kalyani responsible for problems in her life. Vilasini who comes to check on Anand is shocked when she sees him coming out of Nandana’s room. What will happen next on the show? Stay tuned to find out!