In today’s episode of Chembarathi, Anand is shocked to hear Ganga lie to Akhila. 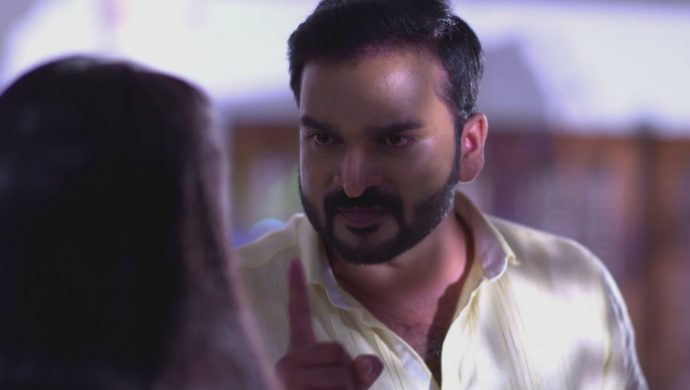 Meanwhile, Kalyani prepares dinner for Anand and waits for him outside her house. Jayanthi and Vilasini are shocked to see the couple enjoying dinner together, but fail to record a video to show Akhila. As Anand comes back inside, Ganga slowly approaches him to have a conversation.

In today’s episode of Chembarathi, Ganga approaches Anand to talk to him. The latter pretends to be oblivious to her approaches and continues his conversation on his phone. Ganga finds him disinterested and continues to tell him about the dinner she had prepared for him earlier. Anand slaps Ganga as her constant requests irritate him. He tells her that she has no right to talk to him or make dinner for him. Vilasini watches the proceedings and gets elated as Ganga gets humiliated again.

Infuriated by the constant humiliation, Ganga goes to meet Priyanka. She tells her about the events that happened and informs her that she is leaving Thrichambarath. Priyanka reminds her of their motives and asks her to change the plan to reach their target. Back in Thrichambarath, Anand informs Kalyani about slapping Ganga. The latter starts getting worried about the repercussions of his actions.

The next day, Anand finds Kalyani disturbed about the events that happened with Ganga. She asks him to be careful as Akhila’s reactions to the same will be unpredictable. Anand acts confident and asks her to listen to his conversation with his mother on the phone. Shortly afterwards, he gets called inside by Sujatha. He meets Akhila and Krishnan who asks him about his final decision about Ganga. As he starts explaining the events from the night before, Ganga interferes and starts lying to Akhila.

Anand is shocked to hear Ganga lying about him gifting her a diamond ring. She also lies about him consoling her and offering to take her out for a trip. Vilasini who had witnessed Anand slapping her gets intrigued in knowing Ganga’s actual motives. As Anand stands helpless, Ganga thinks about her conversation with Priyanka from the night before. What is Ganga’s true motive? Stay tuned to find out!